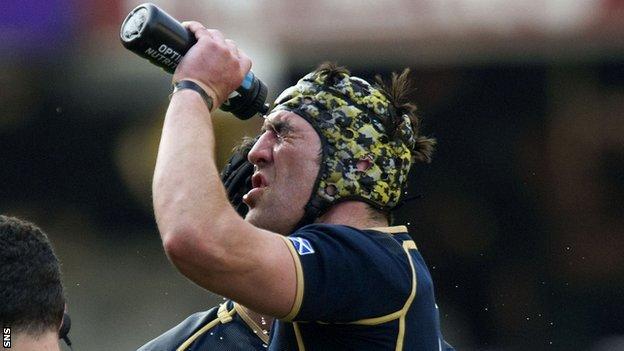 Scotland captain Kelly Brown is coming home from the summer tour of South Africa because of an ankle injury.

The 31-year-old picked up a knock in and a scan revealed he will not recover in time to take any further part in the tour.

A replacement for the flanker will be announced soon.

Meanwhile, Glasgow Warriors hooker Fraser Brown has been called up to the squad following

Fraser Brown, 23, signed a one-year deal with the Warriors last month after playing for Gregor Townsend's side as injury cover from Heriot's last season.

"It's a bit unreal to be honest, a few months ago I was playing amateur Premier Division rugby and now I've been called up to the Scotland squad," he told his club's website.

"I'm immensely proud and hugely excited. I've had one day of pre-season training as a professional and now I'm going out to South Africa."

Al Kellock, who will be Brown's skipper at Scotstoun next season, described the imminent new arrival as "a very good top of the ground hooker".

The lock added: "He gets around the park and he's a very good thrower."

Prop Geoff Cross has also been sent home injured ahead of Saturday's meeting with the Springboks.

Prior to departure, first choice hooker Ross Ford was ruled out of the touring party through injury, along with experienced flanker John Barclay.

There was some positive news after Saturday's bruising loss to Samoa, with prop Euan Murray and Johnnie Beattie making good progress from hamstring and shoulder injuries, respectively.

Both are expected to be available for selection at the weekend.