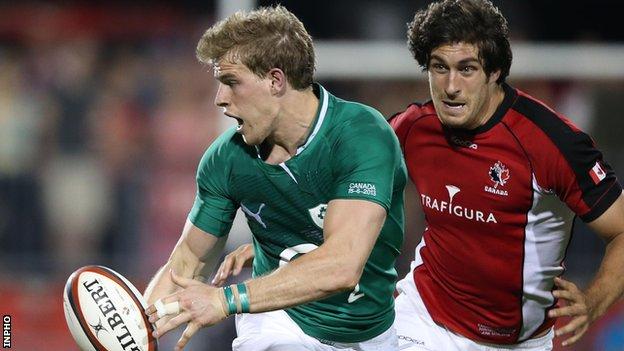 Fergus McFadden bagged a hat-trick and Andrew Trimble marked his 50th cap with a try as Ireland finished the season with a big win over Canada.

Centre Darren Cave and flanker Tommy O'Donnell added tries as the Irish ran away with it in the second half.

After winning by just three points against the US Eagles, this was a much improved performance from the tourists.

Canada's James Pritchard finished the first half as his country's top scorer by landing three penalties.

The first came after six minutes at the BMO Field in Toronto when Tom Court did not release in the tackle.

But Ireland had started strongly and claimed an early score.

From quick ruck ball, Ian Madigan fed James Downey whose pass was expertly picked up by Felix Jones who found Trimble and he scored his 12th try for Ireland.

Madigan converted from the touchline, but Canada hit back with a Pritchard penalty for offside.

Then the Australian-born winger broke the Canadian points record - and put his team 9-7 ahead - Peter O'Mahony had played the ball in an offside position.

McFadden got his first try after collecting Madigan's pinpoint cross kick and skipping past Taylor Paris and handing Connor Braid.

Ireland pressed for more scores but had to settle for a 12-9 lead at the interval.

The tourists were made to pay in the opening stages of the second half as they started loosely.

Isaac Boss was penalised for not using the ball at the base of a ruck and, from the scrum, captain Aaron Carpenter caught McLaughlin napping and fed Mack who raced down the wing.

He was caught short, but the forwards took over and Tyler Ardron crashed over. Pritchard missed the conversion but Canada led 14-12.

Ireland regained the lead after 55 minutes as Kevin McLaughlin scythed through the cover, offloading to Darren Cave who crossed under the posts, with Madigan converting.

McFadden then got his second try, set up by second rowers Dan Tuohy and Devin Toner, with Madigan converting just before being replaced by Ulster's Paddy Jackson.

O'Donnell crossed for his first Ireland try on his first start with just over 10 minutes to go, picking up Paul Marshall's ambitious pass and powering through, with Jackson converting.

McFadden completed his hat-trick on the last play to send the Irish contingent home happy.