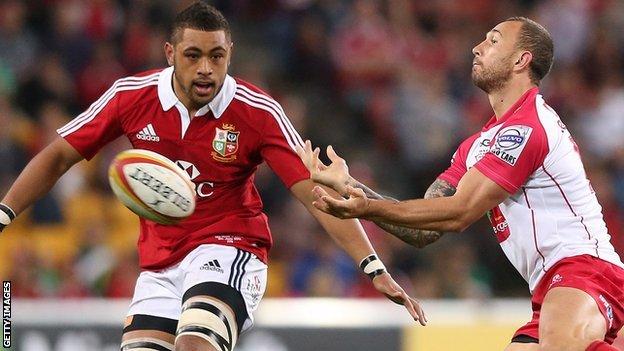 British and Irish Lions assistant coach Andy Farrell has welcomed Australia's decision to omit Quade Cooper from their squad for the Test series.

Wallabies coach Robbie Deans called up six players to his squad on Monday, but not the controversial fly-half, 25.

"I am pleased," said Farrell. "If I was a coach, I would want him in my side. He is a handful.

"I don't know the ins and outs of why he hasn't been selected but he brings lots to the party. I'm pretty pleased."

The chances of Cooper, who was at the heart of Queensland's early onslaught on the Lions in Brisbane on Saturday, facing the tourists again were already remote despite the public clamour for his recall.

After describing the Wallabies environment as "toxic" last year, his defensive abilities were recently cited by Deans as one of the reasons he might be overlooked.

As confirmation of that decision emerged in Australia, Cooper - the cousin of Lions wing Sean Maitland - reportedly had beer thrown over him in a pub.

But despite a series of off-field misdemeanours, his omission from the Australia squad was greeted with shock and outrage in certain quarters.

One former Australia coach, John Connolly, called the decision "astounding" and "a disgrace", while another - Eddie Jones - said he "couldn't believe" the decision to leave out "the most assertive number 10 in the Australian Super Rugby teams".

Cooper stretched the Lions defence in Brisbane with the range of his passing, but Farrell argued Australia have other options at their disposal, even if no-one has the same skill-set.

"They have got a quite a few other boys who can pass well, with James O'Connor and Kurtley Beale coming back into the squad," said Farrell. "They have a magnificent backline but I think Quade has something a bit different."

While O'Connor, who can also play at wing and full-back, is widely tipped to start at fly-half, Jones believes Beale - who has been recalled while he continues to undergo counselling for alcohol-related problems - will be picked to face the Lions.

"I think Kurtley might start," he added. "James O'Connor is a fill-in stand-off and with the pressure the Lions are going to put on that position with their defensive line-speed, you need to have an experienced number 10."