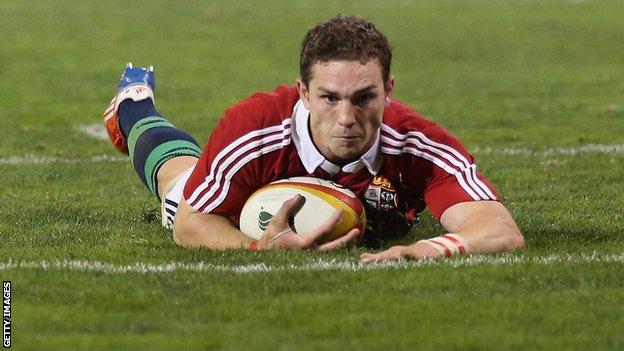 The British and Irish Lions rattled up 10 tries in a one-sided romp over an outclassed Queensland-New South Wales Country XV in Newcastle.

Wing George North scored two of the Lions' six first-half tries, with four more following in an increasingly patchy display after the interval.

It was little more than a training run at times against limited but admirably committed opponents.

But the Lions management will be relieved to avoid any further injury setbacks 11 days before the first Test against Australia.

They will now head to Sydney for Saturday's fifth game of the tour against New South Wales Waratahs, where they are likely to field a majority of their likely Test line-up.

In such an open game it was little surprise perhaps that open-side Justin Tipuric shone, while hooker Richard Hibbard impressed in the loose, even if a couple of line-out throws failed to find their target.

That trend continued when Rory Best replaced the Welshman in the second half, an area the Lions will need to fix ahead of the Test series.

Stuart Hogg enjoyed his first outing at fly-half, linking well with his midfield, putting his back three through holes, while Sean Maitland was prominent in many of the Lions' attacks from full-back.

It took the tourists seven minutes to score their first try, a Tipuric break allowing Brian O'Driscoll to put Alex Cuthbert over in the right corner for his third try of the tour.

"Thoroughly enjoyed my shot at 10 tonight. Job was made a helluva lot easier with Jamie Roberts and Brian O'Driscoll around me."

But they rattled along at a point a minute for the rest of the first half, the scores coming at regular intervals.

Cuthbert cut back inside on the angle to release Conor Murray for the second, before Tipuric put Hogg through a gaping hole in midfield and the fly-half scorched through it.

His conversion came back off an upright to leave the score 19-0 after 13 minutes.

Jamie Heaslip was getting plenty of practice at claiming kick-offs, but Hibbard missed the Irishman at the tail of a line-out to initiate a brief spell of pressure for the Country XV.

Maitland had a kick charged down, and Heaslip dropped the ball after claiming a line-out catch to give the Lions some tackling practice, the tourists conceding two quick penalties.

Country kicked both to touch, but the Lions defence resisted their attempts to batter their way over, Tipuric winning the ball back to allow North and Maitland to race away up the left flank, the later sending the former over for his first Lions try.

Hibbard was driven over after a line-out take from Ian Evans, before a slick score from a scrum. Cuthbert came off his wing to make the extra man in the line before it was spread swiftly left for North to grab his second.

There might have been more tries before half-time, Murray going alone with support outside him, while Sean O'Brien was denied by a foot in touch in the right corner when he tried to power through the remaining cover.

Leigh Halfpenny came on for the second half, with Maitland switching to left wing in place of North, while Alun Wyn Jones replaced Richie Gray at lock.

To their credit the Country XV kept the Lions at bay for nearly 10 minutes on the resumption, before O'Driscoll skipped over for his third try of the tour.

Halfpenny, who had taken over kicking duties from Hogg, with the Scot landing four kicks out of six, finished the eighth try to bring the score up to 50.

Thereafter the Lions got sloppy, Best sending a line-out off beam, Toby Faletau missing a routine pass without looking, and Matt Stevens knocking on.

O'Brien powered over from close range, but the Lions' execution let them down at times.

The crowd were briefly stirred when they thought Country replacement Dale Ah Wang, a 22-year-old removal man who plays his club rugby with Barron-Trinity Bulls in Cairns, had scored a try 13 minutes from time.

It would have been deserved reward for a spirited effort, but after referral to the television match official, the score was ruled out for a knock-on.

O'Driscoll was denied a second score in the left corner, but he ensured the Lions finished on a high as his deft chip was collected by Jonathan Davies with the final move of the match, with Halfpenny adding his third conversion.