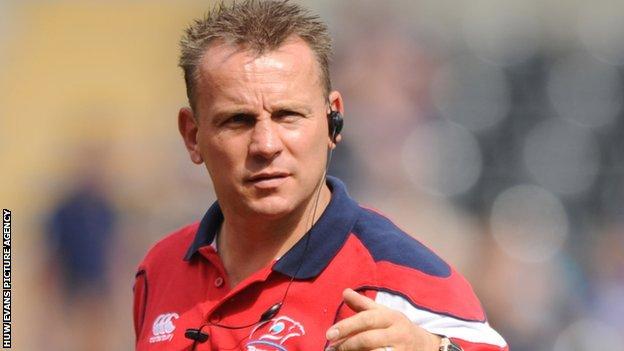 New Newport Gwent Dragons director of rugby Lyn Jones says he would like former Wales captain Kingsley Jones to be part of his coaching staff.

Ex-Sale head coach Jones is currently in charge of the Russian national side.

"Kingsley would be one person I'd be interested to speak to," Jones said.

"He's heading up the Russian effort... at the moment and we have to respect that. With the permission of the Rugby Union of Russia we'd be keen to speak to him."

Kingsley Jones, 43, coached Russia in the 2011 World Cup in New Zealand and continued his role with the Bears after the tournament.

He was also one of Lyn Jones' assistant coaches at London Welsh during 2012-2013.

Former Wales captain and flanker Kingsley Jones comes from Nantyglo in Blaenau Gwent and played his club rugby in Wales for Cross Keys, Pontypridd and Ebbw Vale, before moving to Gloucester, Worcester and Doncaster.

The Ospreys head coach, 49, returns to Wales with the Dragons following stints at an Abu Dhabi school and

The previous director of rugby, Robert Beale, has taken on the role of team manager and Darren Edwards remains as head coach, but assistant Rob Appleyard has left "by mutual consent".

Lyn Jones admits there are other assistant coaches who could come in to "enhance the coaching team", although he hinted that he may employ consultant coaches on a part-time basis rather than as permanent members of staff at Rodney Parade.

"What I've learned over the years is that it's better for my squad of players to have one hour of five-star coaching a week rather than five hours of one-star coaching," Jones added.

"A lot of teams miss out on that point and there's nothing better than a good, experienced coach, and that's what we're going to bring to Gwent rugby."

Jones has himself previously worked as a consultant coach at the Dragons, taking responsibility for contact skills and attack play from November 2008 until the end of that season before the surprise move to Abu Dhabi.

He returned to the UK to take over London Welsh in June 2011 and guided the Exiles to the Aviva Premiership in his first season in charge, although they were relegated after one year in the English top flight.

"The time was right and being offered the job here at Gwent Dragons, although late in the day, was something that I couldn't turn down really after a conversation with [Dragons chairman] Martyn Hazell and the board," Jones said.

"It comes with a lot of responsibility to Welsh rugby, but the beauty is I'm quite an experienced fellow and I'll take that on board.

"I'll make sure we that we don't just make as effective a side as we can for the region of Gwent, but also keep producing a pool of players that can go on and potentially play for Wales and trouble [Wales head coach] Warren Gatland's selection policy.

"We want to educate our players on how to think and how to be smart, and how to play the game properly with a level of intelligence as well as strength and speed and guile.

"There's lots of challenges ahead of us as a coaching team as well as the players.

"Gwent rugby has, over the past few years, produced a huge amount of talent and I want to make sure that talent stays in the region for a long time.

"I'll be looking to give opportunities as often as I can to young aspiring players, because that's where the future is."