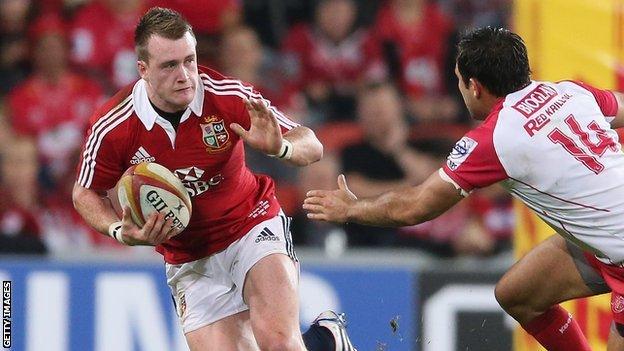 Scottish full-back Stuart Hogg has been backed to succeed at stand-off in his next British & Irish Lions start.

The Lions face a Combined Country XV on Tuesday in the next match of their Australian tour, with Hogg set to feature at number 10.

And, despite Hogg's inexperience in the position, assistant coach Andy Farrell says he has the skill to run the game.

"He's doing what a fly-half should do - dictating and putting them in the right place," he said.

Hogg has never played professionally at number 10, but Farrell is pleased at how the Borderer has adapted in training.

"He has been great," he said. "Just watching the kid in training today, it was his first run and he was dictating to the boys on his inside and outside.

"He's got a long kicking game, he's good at kicking at posts in training and his passing game and running game is exceptional.

"He has to make sure he doesn't confuse himself too much by trying to facilitate too much and make sure he brings his natural game to the party."

Ireland's Jonathan Sexton and Englishman Owen Farrell are both being rested, but Farrell believes Hogg has shown the maturity to cope with the switch of position.

"If you understand what he's about and what his make-up is, he wants to get in there at first receiver and organise," said the coach.

"That is what he naturally does and people who have coached him more than most would tell you exactly the same.

Fellow Scot Ryan Grant is set for a place on the bench after being called up to the squad because of injury to Gethin Jenkins.

England's Alex Corbisiero will start in the front row after he was drafted in to replace Cian Healy.