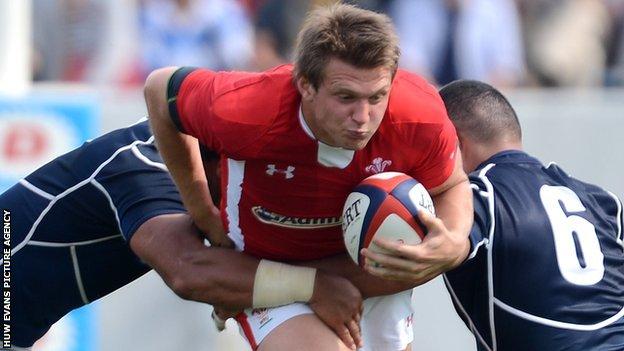 Scotland full-back Stuart Hogg fills in at 10 in Newcastle for the Lions.

"He [Biggar] has just been the fly-half for a Six Nations Championship winning team so he has got to be there or thereabouts," said Edwards.

Biggar, 23, was the only member of the Wales team that beat England in the Six Nations title clincher in March not to be part of the Lions squad.

But the Osprey underlined his case by kicking 14 points as Wales beat Japan 22-18 in Osaka on Saturday.

Ireland star Sexton's hamstring injury means he is a doubt for the Lions' first Test against Australia on June 22 in Brisbane while Farrell's problem is thought to be less serious.

England's 2003 World Cup winning fly-half Jonny Wilkinson, who recently helped guide Toulon to Heineken Cup glory, seems to be out of Lions contention after undergoing surgery on a groin problem.

Wales' number one fly-half Rhys Priestland, meanwhile, was forced to rule himself out of Wales' summer tour to Japan as the Achilles tendon he ruptured in December has not fully recovered.

Meanwhile Hogg, who turns 21 on 24 June, has not played fly-half since school.

The Lions also have no recognised fly-half cover on the bench for Tuesday's clash so coach Warren Gatland says either Wales full-back Leigh Halfpenny or centre Jonathan Davies would deputise if necessary.

Biggar was first capped in 2008 and has gone on to make 18 Wales appearances amid competition from Priestland and James Hook.

And on Saturday, Cardiff Blues' Rhys Patchell, 20, made his debut as a 64th-minute replacement for Biggar.

Edwards insists the Lions have not been in contact with Wales about Biggar and the Ospreys fly-half maintains his focus is on Wales' second Test with Japan in Tokyo on Saturday.

"If a call comes then it would be a huge, huge honour," said Biggar,

"But my main aim is making sure this team is well prepared to go into a test match and put a better show on."

Biggar is expected to be partnered at half-back at the Chichibunomiya Stadium by Lloyd Williams and the Blues scrum-half also feels Biggar would be a worthy late call for the Lions.

"He has been playing well all season," said Williams.

"He impressed with Wales during the Six Nations and with the Ospreys in the Pro12 - and when someone is playing so consistently well he is worth considering if there are any injuries .