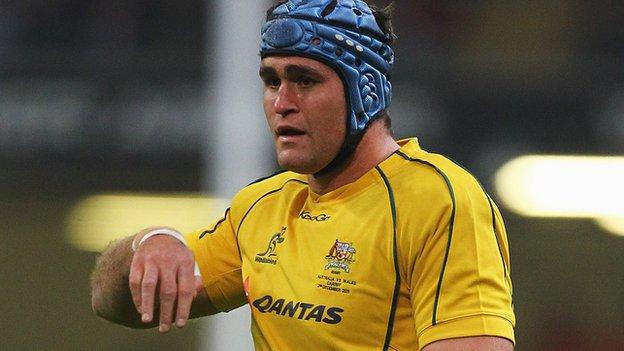 Australia have confirmed Queensland Reds lock James Horwill as captain for the three-Test series against the British & Irish Lions.

He last led the side in November 2011 before a hamstring injury ruled him out of the entire 2012 Test season.

The hosts have also added six players to bolster their training squad to 31 ahead of the first Test on 22 June in Brisbane.

But there is no place for maverick Queensland Reds fly-half Quade Cooper, despite winning plaudits for his display against the Lions on Saturday.

Melbourne Rebels scrum-half Luke Burgess and Queensland Reds hooker James Hanson will also remain with the squad this week as training cover at their Sunshine Coast base.

Beale, 24, was already training with the squad on an unofficial basis last week as he continues to undergo counselling for alcohol-related issues after punching two Melbourne Rebels team-mates, including former Wales number eight Gareth Delve.

Coach Robbie Deans believes the player is physically and mentally ready to return to Test rugby, despite having only played one game of club rugby in recent weeks.

"We know what Kurtley is capable of in this arena," Deans said. "He showed that as recently as last year's tour [to Europe] when he performed outstandingly and led the team from fly-half in adverse circumstances against many of the opposition players we now face again.

"His work last week during the first camp supported our contention that it was not too soon for him to get started again, from either a physical or a mental stand-point. His physical state is a testament both to how hard he has worked but also his desire to get started again."

Ioane is still recovering from knee cartilage surgery and is likely to miss the first Test, with no date yet set for his return.

Hard-running inside centre McCabe proved his fitness for the ACT Brumbies on Friday and has been a mainstay of the side for the past two years under Deans.

Kimlin, whose only two previous caps came against Italy in 2009, can play at lock, blind-side flanker and number eight.

With first-choice blind-side Scott Higginbotham ruled out of the series with a shoulder injury, Kimlin and McMeniman - who returned from injury for Western Force on Sunday - will join Dave Dennis, Ben McCalman and uncapped Brumbies flanker Ben Mowen in the battle for the vacant number six jersey, with Wycliff Palu likely to start at number eight.

Sio's fellow Brumbies prop Dan Palmer and in-form scrum-half Nic White were ruled out of contention after suffering injuries at the weekend.