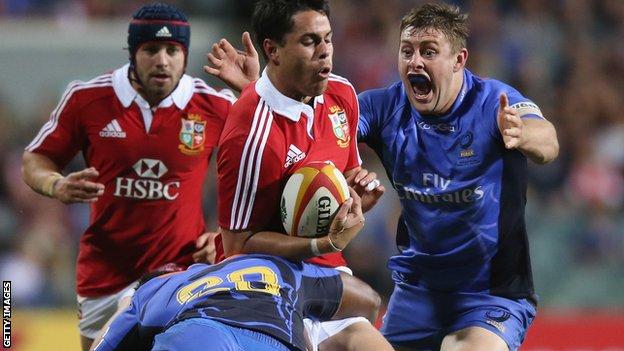 Sean Maitland is unfazed at the prospect of making his full-back debut at international level for the British and Irish Lions in Australia.

The New Zealand-born Scot will not be in his more familiar position on the wing against a Combined Queensland-New South Wales Country XV on Tuesday.

"I've worn the 15 jersey many times for Canterbury and a few games for the Crusaders," he told the BBC.

"They are all linked, wingers and full-backs."

Maitland, who qualifies for Scotland through Glaswegian grandparents, only made his Scotland debut against England in February.

The boys have been on their computers doing their homework off the field, so that'll be me for the next couple of days, trying to learn my role

That and the 24-year-old's subsequent four Scotland appearances came on the wing, meaning his last match at full-back came in a Heineken Cup defeat for Glasgow Warriors against Castres in December.

"It was a few months ago, but I'm really excited for the challenge," he said.

"At full-back, you've just got to be smart about your positional play as well, but it's all related.

"The boys have been on their computers doing their homework off the field, so that'll be me for the next couple of days, trying to learn my role."

Hogg switches to fly-half - a position he last played at school - for Tuesday's game, while fellow Scot Richie Gray is in the pack and late call-up Ryan Grant starts on the bench.

"We will just be focusing on our strengths and it seems to be working, so we've just got to keep that momentum and keep setting the bar high after last night and the boys' awesome effort," said Maitland, who has played in wins over the Barbarians and Western Force.

"It's a good time to express yourself. It is going to be an awesome time."

Maitland gets his opportunity because Hogg is required to deputise for Jonathan Sexton and Owen Farrell, who have been rested after playing in all three Lions matches so far.

"I don't know if I will make the test squad, but it's good to have another string on my bow and show the coaches I can play 15," added the former Maori All Black.