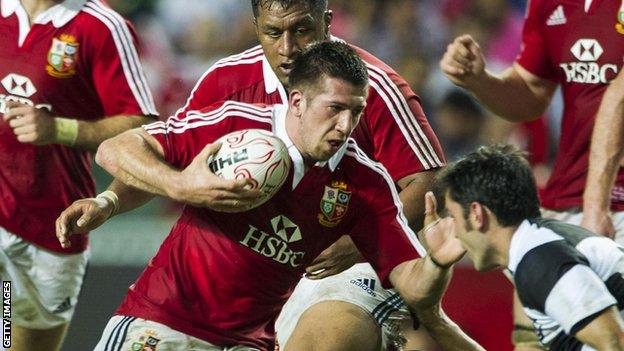 Justin Tipuric wants the British and Irish Lions to maintain momentum when they face a Combined Queensland-New South Wales Country XV on Tuesday.

The Wales flanker makes his second start of the trip having come on as a replacement in Saturday's 22-12 win over Queensland Reds.

And he believes it is important to maintain the tempo of the tour.

"We've kept our momentum going from the first game, so we just want to keep doing the same on Tuesday," he said.

The 23-year-old Ospreys open-side will line up alongside Ireland internationals Sean O'Brien and Jamie Heaslip against the mostly semi-professional opponents in Newcastle, with competition for places increasing ahead of the first Test match on 22 June.

Tipuric is used to selection speculation having been picked on the open-side for Wales ahead of tour captain Sam Warburton during Wales' successful defence of the Six Nations Championship in 2013.

But he feels the competition leads to better performances from all the back-row players.

"[From] day one from when the [squad] was picked everyone has said how much the competition is in the back row.

"It's a privilege to be in that back row competing and I think we're all enjoying it and everyone wants to perform.

"They're quality players and hopefully we'll do [our] jobs and mingle well as a back row.

"Everyone just wants to get out there and play.

"What we're here to do is play rugby, and [I'm] playing in a good back row and I'm very excited to be playing with Jamie and Sean.

"Hopefully we can do well as a team and just perform on Tuesday."

Tuesday's opposition are likely to present a less stern test than the Queensland Reds, but Tipuric is still expecting a tough match.

"It all depends on how we start the game - and hopefully we'll start the game well and bring it that intensity and physicality they won't be able to cope with."