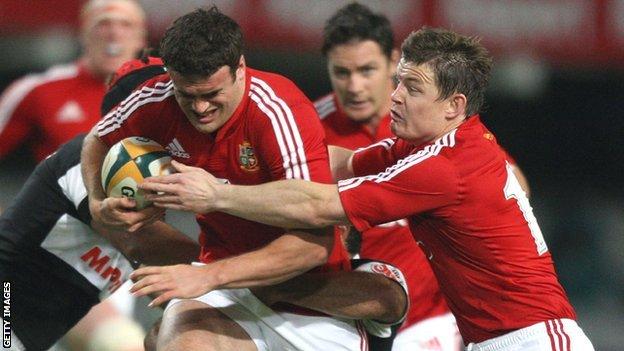 Jamie Roberts believes his partnership with Brian O'Driscoll could be better now than it was the last time they played together for the British and Irish Lions in 2009.

The duo were a success on the last Lions tour of South Africa and have been paired to face a Combined Queensland-New South Wales Country XV.

"You'd like to think we can resume a partnership that's more effective this time around," said Roberts.

O'Driscoll will captain the team.

The Irishman is on his fourth Lions tour, and still sets the standard for midfield play, according to Welshman Roberts - especially when it comes to organising his team-mates.

"His pace, his defensive abilities - all that is something you'd expect from a top-class international centre," said Roberts.

"However, I think his communication on and off the ball is something I learned a lot about in 2009.

"Every call he makes is 99% the right one, and when he speaks people listen.

"It's a great attribute to have, and [especially] for a younger player like me four years ago.

"Maybe I'm a bit more experienced now, but he's a great person to play alongside."

Roberts was a 22-year old with limited international experience when he paired up with O'Driscoll in 2009.

They formed the Lions' centre partnership four times on that tour, including the first and second Test matches, with Roberts being named player of the series.

"Obviously a lot was made of that four years ago and it was a big learning curve for me," he said.

"I was on my first Lions tour, and four years is a long time in rugby.

"Now with 40 or 50 caps under my belt more than the last tour and the same with Brian and four years more experience at international level, you'd like to think we can resume a partnership that's more effective this time around.

"It's all about kicking off where we left off in 2009 and hopefully it goes well."

On this tour, Roberts has not played since the first match against the Barbarians and says he is eager to get back into the action against a team made up primarily of semi-professional players.

He also believes that Scotsman Stuart Hogg will offer a huge running threat having been selected at fly-half rather than his usual position of full-back.

Hogg's selection reflects concerns over the fitness of Irish fly-half Jonathan Sexton who has a tight hamstring and the decision to rest Owen Farrell.

With both players missing from the match-day squad, stand-off cover will be provided by full-back Leigh Halfpenny and centre Jonathan Davies on the bench - a prospect which intrigues Roberts.

"Obviously Leigh on Wednesday [against Western Force] kicked superbly and his all-round game was fantastic as well."