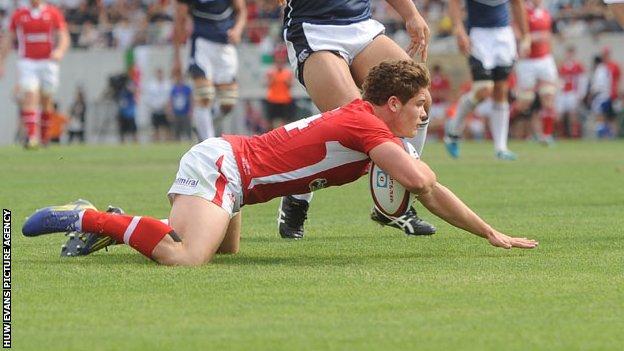 Wales arrived in Tokyo on the Bullet Train for the second Test against Japan with two of their youngsters vowing there's more to come from the tourists after their nail-biting 22-18 victory in Osaka.

Four points was the narrowest margin of victory for over the their hosts in their eight meetings in internationals.

Previously, the closest match between the sides saw Wales win by 23 points.

But there's a feeling among the less experienced players that better is to come in Tokyo.

"With the boys we've got here like Owen Williams, Liam Williams and Daf [Howells], there's a lot more we can show next weekend. We've acclimatised now and we can unleash what we can really do."

Robinson bagged his second try in two caps thanks to an outstanding offload from Liam Williams, followed by snappy passing from Emyr Phillips and Owen Williams - and paid tribute to his colleagues for setting up the crucial 65th minute score.

"I just ran it in, all credit to the boys inside me for their skills and unselfishness," he said.

"For a couple of minutes [after Japan scored their second try] I was thinking 'here we go', those last 15 minutes felt a lot longer than 15 minutes."

Wales were given vital breathing space by an angled penalty from the boot of 20-year-old debutant Rhys Patchell, on at fly-half for Dan Biggar.

"I was thrilled to get on the field with 15 minutes to go but I think I kicked that one with my eyes shut, I was so nervous," he enthused.

"I'm thrilled to have a Welsh cap number and it's mine now for ever and a day."

Like Robinson, Patchell believes the Tokyo outing will see a more composed Welsh display by this youthful Wales squad.

"A week's extra preparation and we've all got a bit more experience so hopefully next week will be a more polished performance."

That will be the fervent hope of Robin McBryde and his coaching team after a nerve-jangling afternoon in the Osaka sun.

However, wily Japan coach Eddie Jones will also try to make his team believe they can pull off an historic first win over Wales after coming so close in Osaka.