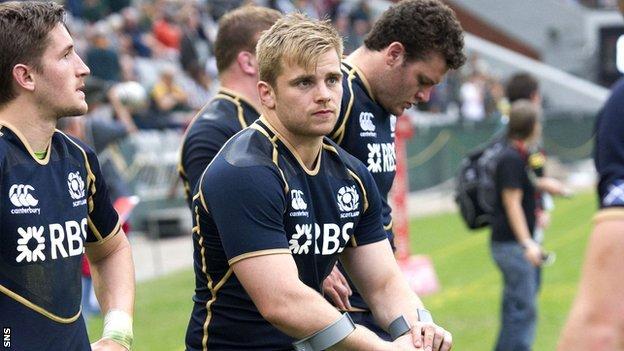 Hooker Pat MacArthur has been ruled out of the rest of Scotland's South African tour after being injured after five minutes of his debut against Samoa.

The Scots have 15 players under treatment after the 27-17 loss.

No decision has yet been made about a replacement for MacArthur, who sustained a knee injury at King's Park.

As the Glasgow Warriors hooker heads home, lead physiotherapist Paul McGinley said: "We have seen some 15 players for treatment following the game and, of these, four have significant injuries and two are subject to the concussion return to play protocol.

"In addition to Pat, our flanker Kelly Brown will be subject to on-going treatment for an ankle injury, while number eight Johnnie Beattie and prop Geoff Cross have shoulder joint sprains.

"Stand-off Tom Heathcote and centre Alex Dunbar are both now on the concussion return to play protocol and a number of other players are carrying the sort of soft tissue injuries that arise from full-on Test match rugby."

Worcester Warriors prop Euan Murray had also appeared to pick up a hamstring injury late in the match and interim head coach Scott Johnson had warned that he and captain Brown could also be forced out of the tour.

Saracens flanker Brown had gone off at half-time against the powerful Samoans, who defeated Scotland for the first time.

Scotland's next match in the quadrangular tournament is against hosts South Africa on 15 June.

"We will have to probably bring in some replacements," added Johnson.

"There are a lot of battered and bruised bodies after the game."

Scotland flew to Nelspruit late on Sunday morning and met up with Glasgow prop Jon Welsh, who is a replacement for Ryan Grant, who has been added to the British and Irish Lions squad in Australia.