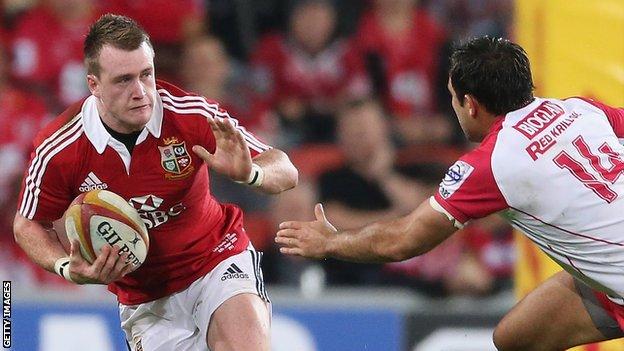 Scotland full-back Stuart Hogg will start at fly-half for the British and Irish Lions in Tuesday's match against a Combined Queensland-New South Wales Country XV.

With Jonathan Sexton and Owen Farrell both rested, the 20-year-old will start in a position he last played at school.

England prop Alex Corbisiero will be pitched straight into action after his arrival as a replacement on Saturday.

Fellow new arrival Ryan Grant will be on the bench.

Elsewhere, Jamie Roberts and Brian O'Driscoll are reunited at centre.

The duo formed a superb partnership on the last Lions tour of South Africa and get their first outing together in Australia.

Sexton is to sit out the game with a tight hamstring, while his Ireland team-mate Tommy Bowe could feature later in the tour after undergoing an operation to repair a broken bone in his hand.

Sean Maitland, a specialist wing, starts at full-back, a position where he formerly played for Canterbury Crusaders in his native New Zealand.

Fellow Scot Richie Gray is the only member of the pack who also started Saturday's 22-12 win over Queensland Reds.

The giant lock starts his third game of the tour, as do Hogg and Wales wing Alex Cuthbert.

Irish flanker Sean O'Brien gets his first outing at blind-side in a revamped back row alongside Jamie Heaslip and Justin Tipuric.

With Sexton and Farrell both given a match off after being involved in all three so far, there is no specialist fly-half cover on the bench.

Head coach Warren Gatland said either full-back Leigh Halfpenny or centre Jonathan Davies would step in should anything befall Hogg, who will also do the goalkicking.