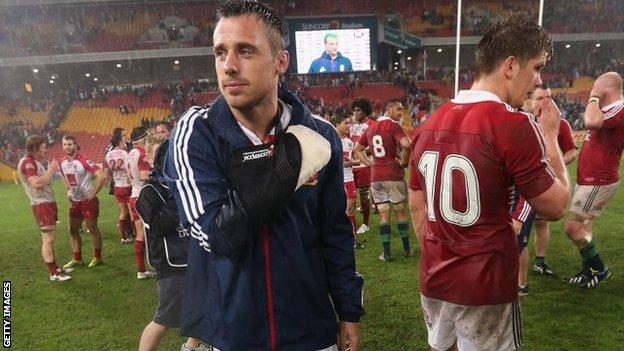 Considering he had just lost a third player to a tour-ending injury in the space of 24 hours, Warren Gatland looked a picture of serenity and confidence.

And why not? Tommy Bowe's cruel misfortune aside, Saturday's 22-12 win over the Queensland Reds was a big pass mark in what the Lions head coach believes will be the toughest challenge they will face outside the Test series.

Hell, Gatland was even in jocular mood when discussing the possibility the Wallabies are already spying on the Lions' training sessions.

"We chased someone with a video the other day, and we know that last week the Australian side were videoing us from behind the pitch and doing individual videos on the players as well," he said.

"But we don't get too paranoid about that. We have got a completely new set of calls that we will introduce at some stage, if they have been listening to us."

Bowe, as he did in his first outing against Western Force on Wednesday, looked wonderfully sharp and incisive before injury struck. One of the stand-out performers on the 2009 tour, he showed every sign of playing an equally influential hand here. The Lions will miss his intelligence.

If they lost Bowe, and Manu Tuilagi departed early, the Reds' casualty list was gruesome by comparison after a full-blooded, high octane occasion that will serve the Lions well.

"I think we got about 50 stitches overall," reported Reds coach Ewen McKenzie. "Ben Lucas just had his ear reattached, Greg Holmes had 30 stitches, Ben Daley has a compound fracture of his toe…"

He didn't even mention Beau Robinson, a thorn in the Lions' side until going head-to-head with Mako Vunipola, and coming off worse.

If the Lions seemed alarmingly stretched at times as the Reds fired out long passes and put men into space at breakneck speed, the tourists did not wilt under the pressure applied by Quade Cooper and chums.

They weathered the first quarter storm, remained secure at the set-pieces, hit back to lead at half-time and narrowly missed out on three tries that were referred to the television match official.

Dan Lydiate was at the heart of a hugely spirited defensive display, topping the tackle count with 13, while hooker Tom Youngs and centre Jonathan Davies also made it into double figures.

George North did his best force of nature impression after replacing Tuilagi, beating players at will. The Lions will pray that nothing befalls the giant North Walian, who is in superlative form.

The Lions won all their own line-outs and Geoff Parling stole four of the Reds'. The scrum was again a source of sustenance, winning several penalties.

Scrum-half Ben Youngs impressed in his first start, grabbing the Lions' only try, while alongside him there was also a more composed display from fly-half Owen Farrell, who as well as landing all six kicks at goal, provided glimpses of a running game hitherto rarely seen.

While Gatland was not totally reassuring when discussing the subject of Jonny Sexton's tight hamstring, Farrell at least suggested all will not be completely lost if the Irishman's problem proves to be something more serious.

"The thing I admire about Owen is, if he doesn't have a good performance or a setback, he has the maturity and competitive edge to go away, think about it, work hard on his game and improve in the next performance," Gatland said of the 21-year-old. "If he is not quite on form one game, you very rarely see that backed up again."

In an intensely physical contest, the Lions gradually adapted to the ferocious pace of the game, and were the more competent when the pace slowed in the wetter conditions in the second half.

Given the Wallabies are unlikely to prevail in a slug-fest, the Reds may well have provided a template for the best way to beat these Lions.

But when asked if he expected Australia to try to run his side off their feet in similar manner, Gatland was again in 'bring it on' mood.

"I hope so," he said. "We think we are in pretty good shape physically. The boys were blowing a bit today but from a coaching point of view, we have over-trained them with the travel as well and taken some of the legs away from them. But when it comes to the Tests we will be in good shape."

So three down, three more to go, before the real business starts in earnest.

Captain Sam Warburton has made no bones about his goal to win every match of the tour, a feat never previously achieved by a Lions squad, and Saturday only served to bolster his belief.

"Being very ambitious, I love the sound of it," he added. "It is obviously going to be massively tough. I have found that out the hard way from playing Australia quite a few times with little success.

"But I am extremely confident with the squad we have. There is so much class there, it is definitely achievable."