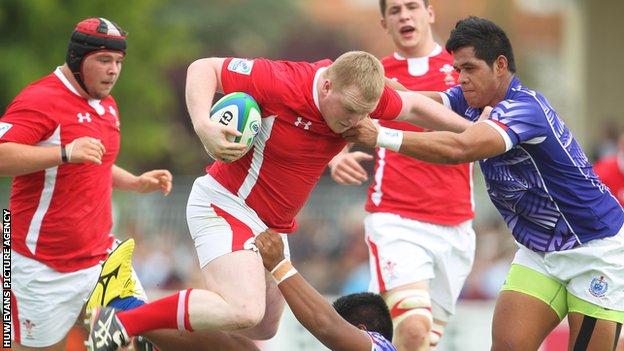 Head coach Danny Wilson has made eight changes to the Wales Under-20 side for their second Junior World Championship pool match against Scotland on Sunday.

Wales beat Samoa 42-3 in their opening game in Nantes.

"We believe we have made relevant changes to keep the squad fresh and reward players who have earned starting places through their performances in training," Wilson said.

Scotland, who lost 44-13 to Argentina in midweek, have made three changes.

Thomas Pascoe returns to the starting line-up while forwards Elliot Dee, Sion Bennett and Jack Jones all get a chance to start after coming on in the win over Samoa.

"A bonus point victory with six tries to boot is a great start. We didn't pick up any significant injuries so we have a relatively fresh squad at the moment, but there's still a long way to go," Wilson added.

"Scotland had a tough time against Argentina but they are a good side and will no doubt raise their game.

"They have some dangerous players such as Mark Bennett at 12 who has played for Glasgow in the Rabo Direct and Adam Ashe so we will have to be aware of their threats.

"Having said that, if we can play as we did in the Six Nations and against Samoa, I'm confident we can give Scotland a really good test."

Scotland, who lost at home to Wales in the Six Nations, have selected Damien Hoyland and Alex Henderson in place of Ruaridh Young and Tommy Spinks, who has been selected on the bench while centre Robbie Fergusson is recalled.

"It's going to be tough. Overall we had a strong and competitive Six Nations but, if there was one team the players would love to play again, it's Wales," head coach Sean Lineen said.

"It's something they've been looking forward to for a while and they're out to make a point.

"Wales are a quality side. They're an excellent counter attacking team and have a very strong scrum. They're big lads too so we're going to have to make sure we play the game in the right areas."