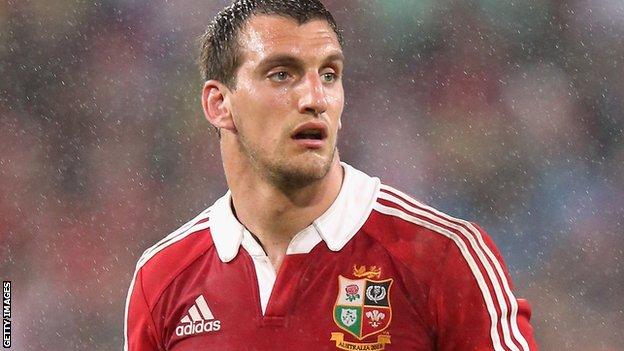 Captain Sam Warburton was delighted to come through his British and Irish Lions debut against Queensland Reds without aggravating his injury.

The 24-year-old Wales flanker finally made his Lions debut, having sat out the opening two tour matches with a knee problem.

The Lions survived their toughest test so far, coming from behind to win 22-12 at Brisbane's Suncorp Stadium.

"It's always a bonus to come through injury free," Warburton said.

"The medics did a great job over the last few weeks. My knee feels fantastic now and I have no problems with it.

"I haven't played for seven weeks, so I'm pleased I came through 75 minutes.

"It was good to get used to the tempo. It reminded me very much of the first Test we played here with Wales last summer.

"A lot of aspects of the game went very well for us. We always want to improve but I don't think there was any major weakness."

The Lions preserved their 100% tour record at the Brisbane ground where they will return on 22 June for the first Test against Australia.

And Warburton is confident the Lions can remain unbeaten throughout the tour, a target he set his team-mates after he was named captain in April.

"Wanting to go through unbeaten might come across as a bit arrogant to some people, but it's just a goal," the Cardiff Blues forward added.

"It was a challenge put to me by tour Manager Andy Irvine. Being very ambitious, I liked the sound of it.

"It's always going to be tough. I found that out the hard way, playing in Australia quite a few times with little success.

"We're extremely confident with the squad we've got here. There's just so much class and I think it's definitely achievable."

The Lions' next tour match will be against a Combined Queensland-NSW Country XV in Newcastle on Tuesday, 11 June.