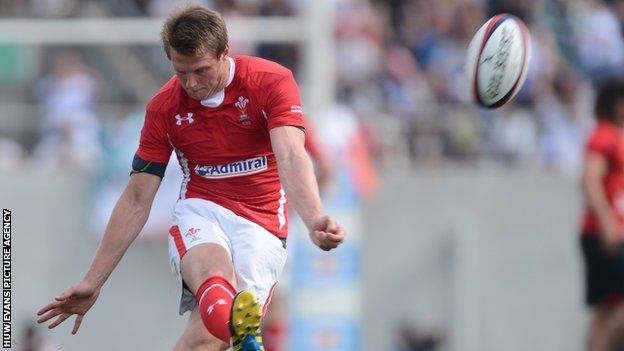 Dan Biggar says Wales will need to improve on their performance in Osaka for next Saturday's second Test against Japan in Tokyo.

Wales' inexperienced side twice came from behind to beat Japan 22-18 in the first Test with fly-half Biggar contributing 14 points.

And Biggar acknowledged Wales will need to do better next weekend.

"We've got to make sure we're on the ball from minute one next week otherwise we face an upset," he said.

"They [Japan] should have every right to feel confident. They played some very good rugby and pushed us all the way.

"That will do us the world of good. It's important we start well, tidy up our set piece and score a couple of more tries."

Wales fielded an inexperienced side in Osaka with 15 players away on British and Irish Lions duty and a number of others injured or rested.

The starting line-up had a combined caps total of 100 with seven players winning their first caps in the game and Biggar said: "It looked like a side that's never played together, which is exactly what we were.

"It was a frustrating first half [but] in the second half we played some decent rugby.

"I thought we were probably a little bit better than the scoreboard showed in the second half.

"Ultimately we're disappointed with our first half which led to a nervous finish.

"But all in all that's probably what we expected Japan to play like. They played some brilliant rugby, just chucked it about and hoped for the best.

"It's important as a young side and a lot of new caps that we sort of managed to find a way to win rather than coming out on the losing side."

The first Test was played in temperatures in excess of 30 degrees centigrade but Ospreys fly-half Biggar refused to use the heat as an excuse for Wales' performance.

"It was hot but that's too much of an easy excuse to put out from our point of view," Biggar added.

"It was warm but the boys would have played in warmer than that, for example in San Sebastian when we played in the [Heineken Cup] quarter-final [for the Ospreys against Biarritz] a couple of years ago and Treviso away when you play in September."

Biggar would not be drawn on the possibility of joining up with the British and Irish Lions squad in Australia should they need fly-half cover.

Jonny Wilkinson's hopes of receiving a late call-up to the Lions tour is effectively over after the Toulon number 10 had surgery on a groin problem.

"If the call comes it will be a huge honour but my main aim, especially for the next seven days, is making sure this team [Wales] is well prepared to go into a Test match next week."