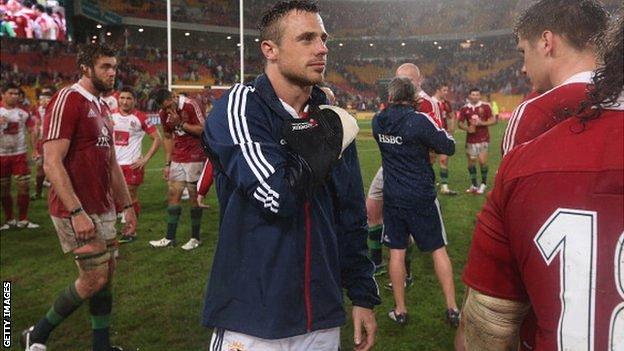 British and Irish Lions assistant coach Andy Farrell has confirmed that winger Tommy Bowe "should be fine" to return to action within a couple of weeks.

There had been concern that the Irishman's tour was over after he had an operation on the bone in his hand he broke playing against Queensland Reds.

"The key thing is making sure the wound heals and there is no infection," said defence coach Farrell.

"The medics will keep assessing him but it still could be a couple of weeks."

Ireland winger Bowe, 29, was forced off early in the Lions' 22-12 win in Brisbane but a successful operation means he still has a shot at making at least part of the Test series, which starts on 22 June.

"Tommy is coming down off morphine now and he's getting his head back together," Farrell added.

"He will be in a heavy bandage/plaster for a couple of days. He will then take that off and be put it in a lighter splint to try to get the wound to heal as quick as possible."

Bowe's Ireland colleague Simon Zebo will arrive imminently as cover, having played for Ireland in their narrow win against the United States Eagles in Texas on Saturday.

Munster man Zebo is expected to be among the spectators when the tourists play a Combined Queensland-New South Wales Country XV on Tuesday.