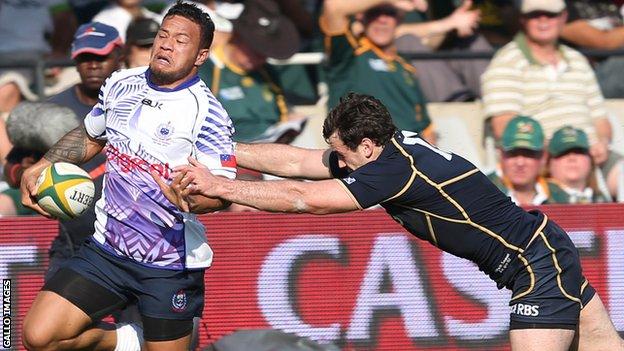 Samoa beat Scotland for the first time as the powerful Alesana Tuilagi ran in two tries at King's Park in Durban.

Samoa started strongly with James So'oialo and Tuilagi touching down inside 12 minutes as a youthful Scottish side fell off tackles.

Greig Laidlaw kicked Scotland back into the game and a Sean Lamont try had the men in blue ahead briefly.

But Tuilagi had the final say, breaking through for a score as the Scots failed to make their possession count.

Samoa defended well in the second half but were given a huge helping hand by Scotland's poor decision-making and a remarkable 19 handling errors from Scott Johnson's team.

Scotland had won the last two meetings between the nations with last-minute kicks and can have no complaints about this loss after such an uninspired performance.

Samoa caused the Scots all sorts of problems in the opening exchanges, with their change of angles and quick offloading.

The Pacific Islanders went ahead when a swift passing move started deep in their half and ended with So'oialo going over with ease in the corner before adding the conversion.

Laidlaw narrowed the gap with a tough penalty kick only for the Samoans to cross the try-line again soon after.

The Scots were undone by slick handling across the field and 117-kilogram Tuilagi stormed over, with So'oialo, knocking over the extras.

It could have been much worse for Scotland as Alapati Leiua and Tusi Pisi went close to adding further tries.

Laidlaw fluffed a relatively easy penalty before atoning with a couple of successful efforts to leave Samoa 14-9 ahead at half-time.

Scotland made a bright start to the second half, with a Laidlaw penalty and a try in the corner from Lamont in a move that should have been finished off much earlier.

Tim Visser, wide open and right in front of the posts, was somehow missed with a wild pass after a turnover when Samoa messed up having won a scrum.

So'oialo levelled immediately with a penalty and the fearsome Tuilagi struck again, using his physique to flatten Peter Horne before touching down.

After converting the try, So'oialo kicked a second penalty to give the islanders a 10-point advantage with 10 minutes remaining.

Pat McArthur lasted just five minutes on his Scotland debut, with a knee injury forcing the hooker off, while captain Kelly Brown did not reappear after the interval after picking a leg knock.

There may have been a host of new faces but age-old Scottish problems resurfaced, with several scoring opportunities spurned.

Needing two scores in the closing stages, Scotland got within inches of the line, only to fumble in possession and there were more groans of frustration as a line-out in the corner resulted in a needless knock-on.