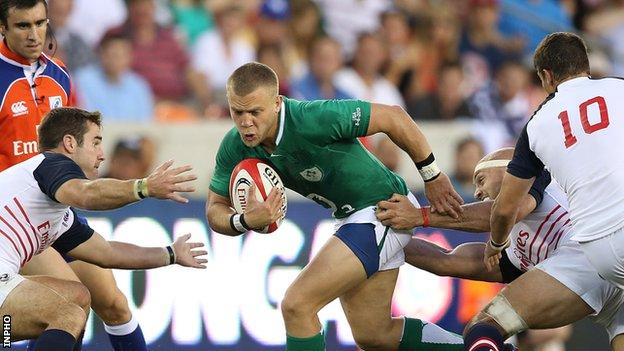 The US Eagles were denied a first victory over Ireland in Houston as the tourists escaped Texas with a win in front of new coach Joe Schmidt.

Ian Madigan kicked all the young Irish side's points as they were left hanging on against Mike Tolkin's USA team.

Saracens back Chris Wyles kicked all of the home points and the Irish needed to produce some great defending in both halves to prevent US tries.

A record attendance for a US home game of 20,181 watched the Houston contest.

Interim Ireland coach Les Kiss had selected a number of new faces but the visitors began well with new cap Robbie Henshaw making two big hits early on and Madigan scored his first international points with a ninth-minute penalty after prop Mike Ross had got the nudge on his opposite number Shawn Pittman.

It was to prove a trend as the Eagles front-row struggled against the Irish trio of Dave Kilcoyne, Richardt Strauss and Ross.

Another US scrum infringement was punished by Madigan but the Irish then had an escape as another debutant Ulster's Stuart Olding was forced to produce a try-saving tackle to deny Luke Hume after Darren Cave had been left isolated following a long pass from his fly-half.

The pressure did yield an opening penalty for Wyles but Madigan then restored a six-point advantage for the visitors by slotting his third successful kick.

But Ireland could not pull away and Samu Manoa, who had earlier felled Ireland captain Peter O'Mahony in a huge tackle, broke through the Irish cover and the scrambling defence conceded a penalty for Wyles to score.

The dominant Irish scrum provided one more chance for Madigan to make it 12-6 at the break as the temperatures reached the mid-20s in the BBVA Compass Stadium.

It was a tough game and we expected nothing less

Captain Todd Clever got the US on the front foot from the off after the break as he burst into the Irish 22 and only an excellent turnover from Chris Henry and O'Mahony saved the visitors.

A Manoa mistake from a Wyles knock-on allowed Madigan make Ireland's total 15 and it should have been more when Fergus McFadden scythed through on an Isaac Boss pass, only for Henshaw to spill his pass with the line at his mercy.

But despite losing Clever for 10 minutes after his tip-tackle on Devin Toner, the US got on top - and roared on by the boisterous crowd, Wyles closed the gap to three points with two further penalties.

Taku Ngwenya attempted a late attack for the Eagles but Irish replacement Felix Jones hauled him down and the American winger was penalised for not releasing as the visitors held on.

In addition to starters Olding and Henshaw, Jamie Hagan, Mike Sherry and Tommy O'Donnell all come on for their Ireland debuts and captain O'Mahony paid tribute to the newcomers.

"It is an away from home Test win and I am thrilled to bits for the boys who won their first caps that the rest of the boys got the win on such a special day," he said.

"The overall thing is we got a win away from home, it was a tough game and we expected nothing less.

"The USA have really improved over the last 12 to 18 months, they have been really pushing on.

"It was tough out there, the conditions were tough and the ball was really slippy."