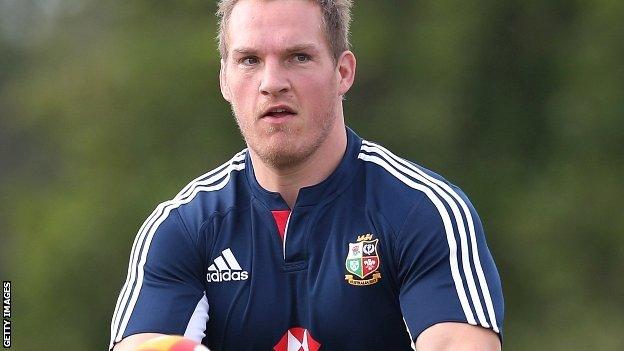 The British & Irish Lions have suffered a further major blow with Wales prop Gethin Jenkins forced out of the Australia tour with a calf injury.

Jenkins joins fellow loose-head Cian Healy in an early exit after a scan showed a calf strain has not healed.

The 32-year-old arrived on tour with the injury but was set to face Queensland Reds on Saturday before aggravating it on Friday.

Alex Corbisiero and Ryan Grant have been called up as cover.

British & Irish Lions Head Doctor James Robson said: "The expected time for recovery is at least three weeks and given the remaining duration of the tour we felt that Gethin should return home and continue his rehabilitation there."

The loss of the experienced Jenkins, who started five Lions Tests on the previous two tours to New Zealand and South Africa, is another setback.

The Welshman, who will fly home on Sunday, and Healy were widely expected to battle it out for the Test loose-head spot.

But the departure of both players inside 24 hours leave England's Mako Vunipola, who starts against the Reds on Saturday, as the front-runner.

Corbisiero made a five-flight, two-day trip to Australia and said: "It was a long journey but I'm not complaining - I would do it again just to be here.

"You never like to come in for anyone who is injured and I feel for Cian and Gethin but I just feel so privileged to be given this opportunity.

"It's been a bit of a whirlwind afternoon meeting everyone and I'm looking forward to going to the game tonight and then getting down to training. I also want to wish England all the best against Argentina."