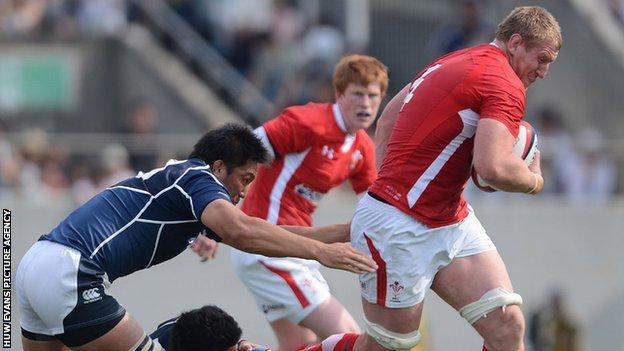 Wales captain Bradley Davies praised his team's adaptability after their nail-biting 22-18 win over Japan in Osaka.

An inexperienced Welsh team trailed 11-6 at half time, but improved after the interval to clinch victory in searing temperatures.

"But we changed things second half and we got the result."

Fly-half Dan Biggar was the only Welsh player in the starting line-up who started against England in the Six Nations in March - the last time Wales played an international.

And the lack of big-match experience was evident for long periods as the Welsh struggled with the heat and their lively opponents.

But 14 points from Biggar's boot along with a try by Cardiff Blues wing Harry Robinson and a solitary penalty by fly-half replacement Rhys Patchell on his debut eventually saw the Six Nations champions home.

The result was the key for Davies, with a second Test match taking place in Tokyo on Saturday, 15 June.

"We know there's things to work on for next week, we were under the pump a lot out there today.

"We'll take positives and negatives from that today, but the result is the result.

"You can see the conditions, there's not many games we play in 30 degrees back home so the boys dug in well.

"We've learned a lot about ourselves today, we were a bit of an unknown bunch going into the game, but now we know each other very well and hopefully we can kick-on for next week."