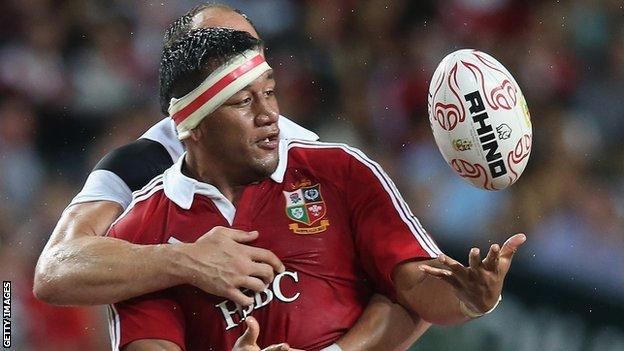 Irish loose-head Healy's tour has been ended by an ankle injury.

"I don't think it's as bad a blow as all that because I've been quite impressed with the way Mako Vunipola's been playing," said Price.

Jenkins had been named for his first tour start against the Reds.

Healy 25, sustained the injury in Wednesday's

The 41-cap Wales tight-head says Healy's departure was "a huge disappointment", adding: "He was touted as favourite for the Lions loose-head spot and Gethin was pushing him hard even though he hadn't played a game.

"His [Jenkins'] reputation suggested he was going to be the next in the frame.

"But I don't think it's as bad a blow as all that because I've been quite impressed with the way Mako Vunipola's been playing.

"Normally you only see him coming off the bench for England as an impact player.

"But when he started that first game [the Lions comfortably beat the Barbarians] he seemed to be doing quite well right from the start."

And Price says Jenkins' calf problems merely exacerbate a tough season in which he was behind former England and Lions prop Andrew Sheridan in French club Toulon's pecking order.

"It's not an ideal situation [for Jenkins] to be in, really."

However, Price says even with a lack of game time, Jenkins could earn a first Test call up on 22 June alongside familiar company in fellow Welshmen Adam Jones, and Richard Hibbard.

"What is more troubling is it's a recurrence of an injury he's had a lot of trouble with in the past," said Price, of

"And if he keeps on getting it, it makes you wonder whether he will last the tour."