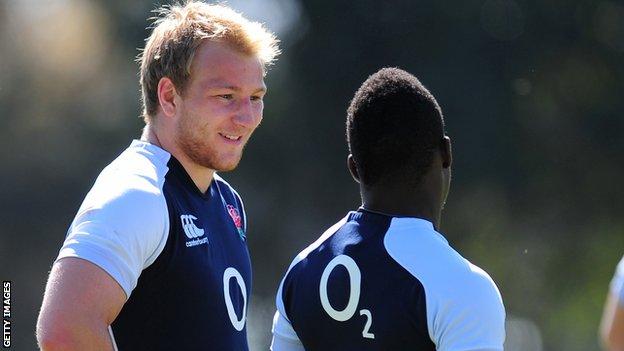 Debutant Matt Kvesic is expecting a "really physical battle" when he wins his maiden England cap in the first Test against Argentina on Saturday.

The 21-year-old open-side flanker is one of two new caps in Stuart Lancaster's team, with Christian Wade set to start on the wing in Salta.

"I feel a huge amount of pride, I'm just excited to play for my country," said Gloucester-bound flanker Kvesic.

Argentina are renowned for their scrum and set-piece work

"The Argentines are renowned for their physicality."

Burns, who has just turned 23, won his only previous cap as a replacement in England's famous win over New Zealand in December 2012.

Both Gloucester fly-half Burns and 22-year-old Wasps winger Wade, who was voted both players' player of the year and the young player of the year by his peers last month, are potent attacking talents and Kvesic is keen to supply them with plenty of ball in Salta on Saturday.

"Freddie's a world class player in my eyes, his game management is outstanding but he's also a dangerous attacking 10," said Burns.

"I've played against him a couple of times and you don't like defending against him because he is unpredictable.

"With Christian I don't think anyone in the Premiership would like to go one on one with him in the 15m channel, let alone the five-metre channel.

"Having that talent in the team and having that try-scoring ability is great. As a forward it makes you work harder - you want to get the ball in those boys' hands with a bit of space and plenty of time."

Like England, who are without virtually an entire XV because of Lions calls and injured and resting players, Argentina will also be below strength, with their big names held back for their second campaign in the Rugby Championship, which runs from 17 August to 5 October, alongside New Zealand, South Africa and Australia.

Historically the Pumas' strength has been up front and open-side flanker Kvesic knows he will not be in for an easy ride on Saturday.

"I expect nothing less than a really physical battle," he insisted.

"They are renowned for their scrum and set-piece work, but more specific to me is the breakdown.

"They showed in the 2012 Rugby Championship that they're an aggressive side at the breakdown, they try and disrupt a lot of ball and they can be very successful, especially in those wider channels, so it's important to look after the ball.

"But if us forwards can secure quick ball and unleash the backs, I think we'll be all right."