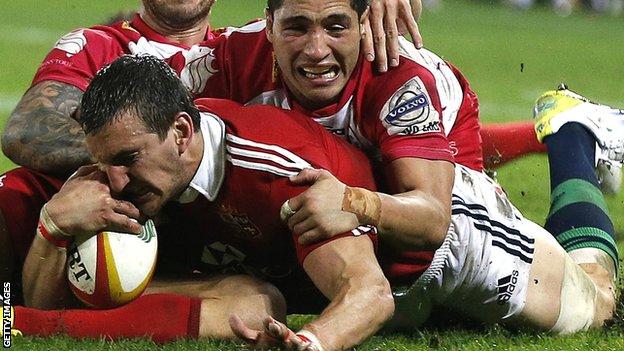 The British and Irish Lions survived a punishing examination from the Queensland Reds to maintain their winning start to their Australia tour in Brisbane.

Three Owen Farrell penalties and a Ben Youngs try put the tourists 16-7 up after Luke Morahan's stunning try for the Reds in a breathless first half.

After Farrell landed a fourth penalty, the Reds conjured a second score for scrum-half Nick Frisby to make the Lions sweat.

They did not emerge unscathed however, with the brutal nature of the collisions taking a heavy toll on both sides.

Having already seen two loose-head props, and forced out of the tour, there was further concern as centre Manu Tuilagi departed after 20 minutes with an injured right shoulder. Wing Tommy Bowe was also forced off early in the second half.

Lions hooker Tom Youngs and centre Jonathan Davies both received treatment for head wounds, while the Reds had flanker Beau Robinson and full-back Ben Lucas both carted off in the second half, Robinson after a sickening clash of heads with Mako Vunipola, who emerged intact.

Robinson later sat on the Reds bench and the flanker gave a thumbs up to the crowd as they applauded his reappearance after treatment.

The tourists wanted a proper test, and the opening minutes were several notches up in intensity on anything seen so far as the Reds thundered into the contest in front of a raucous 50,000 crowd.

Bowe was penalised for a high tackle in the first frantic exchanges, and the Reds immediately ran the penalty from their own 22.

Alex Cuthbert had to race back to deny Reds full-back Ben Lucas after his chip down the left flank, while the Lions were also grateful for Stuart Hogg's try-saving tackle on centre Ben Tapuai and a fumble from Reds open-side Robinson to keep their line intact.

Geoff Parling and Richie Gray also stole two crucial line-outs in their own 22 to help lift the early siege.

Instead it was the Lions that almost drew first blood when Davies released Bowe on a wonderful stepping run off his left wing.

The Monaghan man did superbly to get a pass away out of the tackle which Cuthbert picked up on the bounce and motored to the corner.

But Reds wing Morahan forced him into touch in the act of dotting down, the first of four occasions in the first half the television match official was called to adjudicate on a Lions try.

Farrell then wasted an overlap when he opted for a cross-kick that sailed into touch, but the fly-half did open the scoring in the 14th minute after the Lions won a second scrum penalty.

The Reds hit back with a stunning try from Morahan, who eluded Cuthbert's initial tackle, cut inside and brushed off Sam Warburton's effort before chipping over Hogg and getting the luck of the bounce to score.

The giant Welshman almost sniffed out a try instantly when he chased Davies' kick ahead, but the ball went dead.

Farrell's second penalty brought the Lions to within a point, but they struggled to make their brief ascendancy count, turning ball over inside the Reds 22 and conceding a penalty at the breakdown.

Cooper missed a chance to extend the Reds lead when he pushed a penalty wide, and the Lions gathered themselves.

Ben Youngs created space to release North down the left wing. The Welshman found Farrell with a brilliant offload and it seemed the fly-half must score, but the TMO decided he had failed to ground the ball properly as the Reds cover scrambled back.

The Lions managed to disrupt the resultant Reds five-metre scrum however, and Youngs fortuitously diverted the loose ball over the line before diving on it.

This time the TMO gave the green light, and Farrell's conversion made it 16-7.

Moments later, an electrifying run from North, scything his way past several would-be tacklers from his own 22, deserved another try. But flanker Warburton, released for the left corner, did not quite have the pace to finish and the TMO again ruled against the Lions.

Farrell's third penalty with the last kick of the half gave the half-time score a somewhat flattering look for the Lions.

But they continued to be stretched by the tempo and width of the Reds' attack in a scratchy, stop-start second half which was hampered by a greasy ball.

Bowe went off early on the resumption holding his left wrist, as a steady drizzle began to put a dampener on proceedings.

Farrell's fifth penalty made it 19-7 before the Reds conjured a superb second try. A long cut-out pass released right wing Rod Davies, who raced clear before sending scrum-half Frisby to the line.