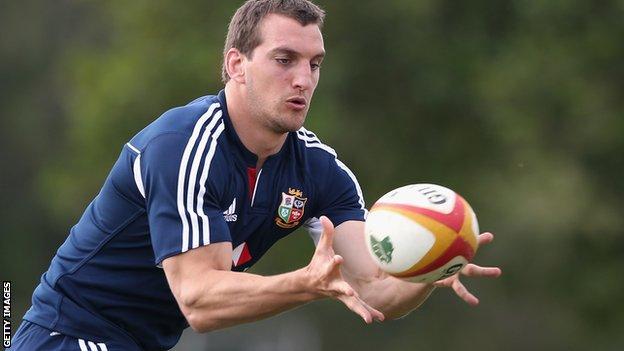 Rob Howley believes captain Sam Warburton could play a key role for the British and Irish Lions against Queensland Reds.

The Wales flanker will make his Lions debut after recovering from a knee ligament injury.

The 24-year-old starts in an all-Welsh back row completed by Dan Lydiate and Toby Faletau.

"I think you'll see an 'A' game from him, like you saw against England in the Six Nations," Howley said.

The Lions assistant coach added: "Something we need is pressure on the ball and his combination with Dan Lydiate is going to be a key factor.

"One thing you don't want to do against the Queensland Reds is to give them speed of ball in the contact area.

"It's a key area, the contact area, and I'm sure you'll see Sam Warburton enjoying those moments when those rucks and contacts occur."

Warburton missed the first two tour games against the Barbarians in Hong Kong and the win over Western Force in Perth on Wednesday.

"It will be a proud moment for Sam," added Howley. "It's probably been a frustrating couple of weeks for him.

"As Welshmen, we are all very proud to have Sam as captain of the British and Irish Lions. He is a leader by action."

Queensland Reds include fly-half Quade Cooper, who has not been included in Australia's 25-man preliminary Test squad to face the Lions.

Cooper will be playing for one of six Wallabies squad places yet to be filled for the Tests.

Australia coach Robbie Deans is scheduled to name the six on 11 June.

Howley, who played in the Lions' 42-8 win over the Reds in 2001, admits the tourists will be keeping a particular eye on the 25-year-old he describes as a "maverick."

"We've spoken about Quade. We believe he's got a special skill acquisition and I'm sure he wants to be instrumental in that game to put his hand up for Australia selection."