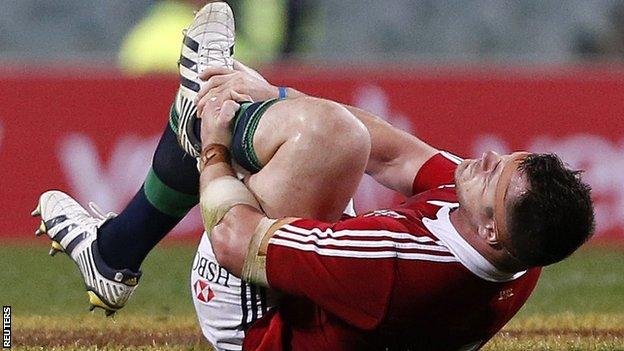 British and Irish Lions prop Cian Healy has been forced to leave the tour of Australia with an ankle injury, just hours after being

The Ireland loose-head prop, 25, sustained the injury in Wednesday's

He was cleared earlier on Friday of biting Force scrum-half Brett Sheehan.

Alex Corbisiero and a second new loose-head has now been added in Scotland's Ryan Grant, as Gethin Jenkins has a calf problem.

But Jonny Wilkinson's chances of joining the tour party as a replacement look to be over after he had surgery on a groin problem, which will keep the 34-year-old out of action for "a few weeks".

Wales loose-head Jenkins suffered tightness in his calf during Friday's captain's run at Suncorp Stadium prior to Saturday's match against Queensland Reds in Brisbane.

As a result he has been replaced in the starting XV by England prop Mako Vunipola, with fellow England prop Dan Cole replacing the Saracens man on the bench.

Healy twisted his left leg in the 37th minute of the win over the Force in Perth and had to be taken off on a stretcher.

A scan on Friday confirmed he had sustained "significant ligament damage" and that his tour was over.

"It has been a day of mixed emotions for him after being quite rightly being cleared of foul play but then the scan revealing the extent of the damage to his ankle. He has made a big contribution on and off the field in the last two weeks and we wish him well in his recovery."

New Zealander Hampton, an independent judicial officer appointed by the Australian Rugby Union, concluded it was possible that during the incident Sheehan's arm "may have come in contact with Healy's mouth and due to the pressure of the tackle it is likely that unavoidable contact between Healy's mouth and Sheehan's arm occurred".

"There is no conclusive video evidence of the incident and post-match it was not possible to distinguish any discernible bite marks outside of the 'regular' marks usually found following a rugby match," Mr Hampton said in his findings.

The prop always maintained he had done nothing illegal and added: "The opposition player's arm hit me. It is as simple as that."

Gatland said Healy's fellow prop Jenkins had "trained all week" but that his calf had tightened up on Friday.

"It's right not to play him," added Gatland. "We will assess him over the next 24-48 hours but Mako has done well in the last two games and this is another chance for him to step up.

"Given Cian's injury we have decided to bring Ryan in. He has played well in the RaboDirect Pro 12 this season and for Scotland in the RBS Six Nations and we look forward to him and Alex Corbisiero arriving tomorrow [Saturday]."

The Lions - made up of players for the four home nations unions in England, Scotland, Ireland and Wales - are two matches into a 10-game tour which culminates in a three-Test series against Australia.

The tourists enjoyed big wins in their first two matches and on Saturday face Queensland Reds, who will be captained by out-of-favour Australia fly-half Quade Cooper.