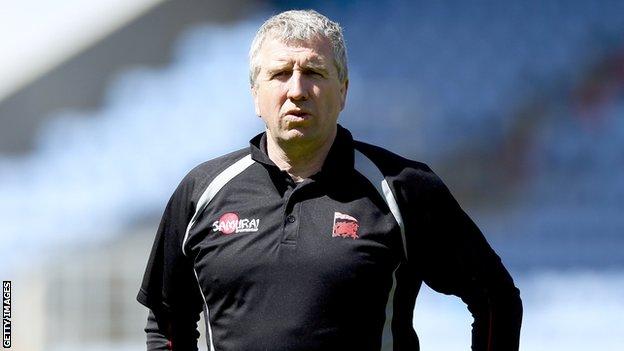 London Welsh head coach Lyn Jones has left the club a year before his contract expires for personal reasons.

Jones, who has been linked with a move to Newport Gwent Dragons, has asked to leave in order to move back to his home country Wales to be nearer his family.

He guided Welsh to the Premiership in 2011-2012 but they were relegated in May after just one season.

"We are very sad to lose Lyn but it is clear that he wishes to move back to Wales," said chairman Bleddyn Phillips.

"The club entirely understands the reasons for the move, is sympathetic to Lyn's request and is ready to accommodate it and provide all the support it can to ensure the move works well for Lyn and his family."

Under Jones, the club but were initially refused admission to the Premiership after concerns about their home ground, having decided to move from their home at Old Deer Park in Richmond to Oxford United's Kassam Stadium.

The club were allowed to join the top flight but were relegated after just one season.

Welsh's survival chances were not helped by being docked five points and fined £15,000 after former team manager Mike Scott claiming that he was English when he was not.

Scott was banned for life by the Rugby Football Union as a result of his actions.

"Just when I thought, as a coach, I'd experienced all what the game can offer, London Welsh happened," said former Ospreys coach Jones.

"The last two years have proved both exhilarating and challenging, but my return to Wales has to happen and I leave with hope that I have helped players improve in a small way.

"The club has the vision and ambition to ensure a successful pursuit of retaining its position as one of the top teams in English rugby, and I wish it all the very best for the future.

"I've made many lifelong friends here and I'll make sure our paths will cross again one day. To all at London Welsh I say a heartfelt thank you."

Phillips says the club is already at an advanced stage in bringing in a replacement for Jones as they prepare for life back in the Championship.

"The club is well under way in the process of choosing a successor to Lyn and has already identified a short list of three eminently qualified people to take over the role of head coach.

"We very much hope to be able to move forward and finalise such discussions in the next few days and then make an announcement."