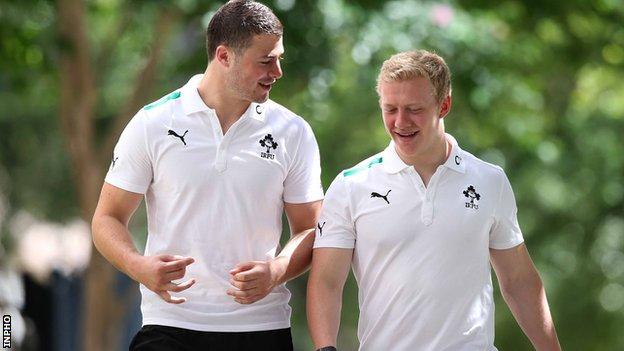 Ireland interim coach Les Kiss has opted for youth and handed debuts to Stuart Olding and Robbie Henshaw for Saturday's match against the Eagles.

Connacht fullback Henshaw, 19, becomes only the fourth teenager to play for Ireland in the professional age.

Olding starts at inside centre after just 15 appearances for Ulster.

Ireland's starting fifteen have just 115 caps between them while three more players could make their debuts from the bench in Houston.

Kiss has opted for Leinster fly-half Ian Madigan ahead of Ulster's Paddy Jackson, with the 24-year-old making his first start in the number ten jersey.

The Australian has put his faith in youth by making Connacht youngster Henshaw a full international at 19, meaning he becomes the fourth teenager to play for Ireland in the professional age after Gordon D'Arcy, Luke Fitzgerald and Rhys Ruddock.

Olding, meanwhile, is handed his first cap after just 15 appearances for Ulster and is just three months older than Henshaw.

Kiss said he had no hesitation in introducing Henshaw and Olding to the international arena, while Tommy O'Donnell, Jamie Hagan and Mike Sherry can all make their debuts off the bench.

Kiss said: "the tour from the beginning was an opportunity".

"We have seven uncapped players on tour and Stuart and Robbie have had fantastic seasons.

"They have developed, slowly but surely, and had some great experiences - not only in the Rabo (RaboDirect Pro12) but in the Heineken Cup.

"Robbie was involved in the Six Nations and was there or thereabouts when we had a huge injury rate. He has done exceptionally well in the full-back role.

"Stuart has come home like a train this season, he had a fantastic end to the season and is deserving of the opportunity."

Henshaw described his first cap as a "dream come true".

"I'd imagine there will be a big step up compared to provincial rugby, but I'm really excited about that and can't wait," he said.

Olding added: "I was over the moon when I heard from Les that I was going to start".

"A start is great, even the bench would have been fantastic. I'm delighted, it will be in front of my parents as well."

Kiss hands over the reins to incoming Ireland head coach Joe Schmidt at the end of this tour to the USA and Canada.

The New Zealander arrives in Houston on Saturday and will watch from the stands at the BBVA Compass Stadium as Ireland take on a United States side with all their available big guns in the starting line-up.