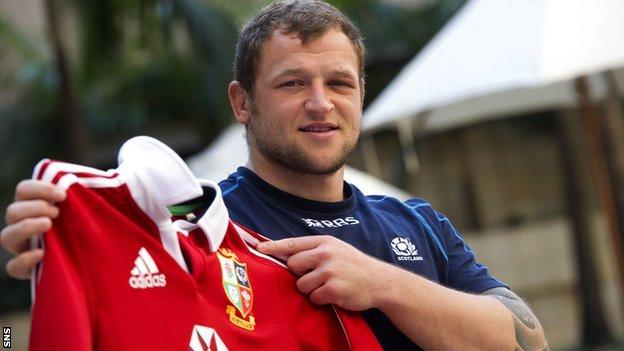 Scotland prop Ryan Grant has been called into the British and Irish Lions squad ahead of the clash with Queensland Reds.

The Glasgow loose-head had been in South Africa with Scotland for a quadrangular tournament.

Grant has been called up as cover for Gethin Jenkins who is struggling with a long-term calf injury.

"It's the top of the game. To call myself a Lion is the greatest honour," said Grant.

"What can you say? It's been so fast I've not really had time to process it.

"This time last year I got my first cap. Now I'm heading out to Australia to represent Scotland for the Lions."

Scotland interim head coach Scott Johnson, who has drafted in Jon Welsh, also expressed delight at the call-up of Grant.

"We are absolutely stoked for Ryan," he said.

"People out there may be in for a pleasant surprise as to what a player he is."

"Given Cian's injury we have decided to bring Ryan in," said Gatland.

"He has played well in the RaboDirect PRO12 this season and for Scotland in the RBS 6 Nations and we look forward to him and Alex Corbisiero arriving tomorrow."

Alasdair Dickinson will replace Grant for Scotland's Test against Samoa in Durban on Saturday, with Moray Low on the bench.

Glasgow's Welsh will join up with the squad for the clash with South Africa on the following weekend.