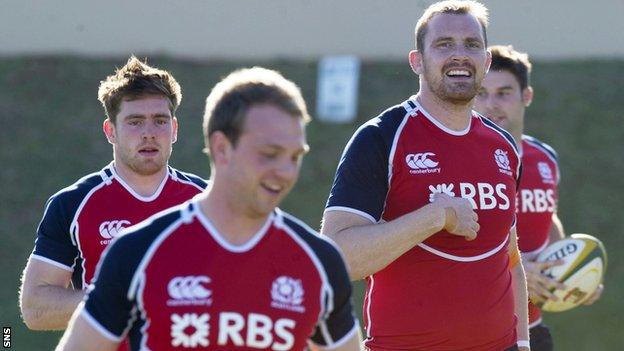 Scotland will be embarking on the most significant of the Home Nations' tours this summer when they kick off the 'Castle Lager Quadrangular Tournament' against Samoa on Saturday.

The other two participants, South Africa and Italy, kick off later in the day.

Why is it a significant tour? Simply because Scotland is the nation nearest to full strength, missing only four Lions tourists and a handful of injured players.

And they will play opposition that will severely test them.

Samoa have improved dramatically in consistency over the past two years, with their win against Wales in Cardiff last autumn giving more evidence of how special it was for the Scotland side to beat them in their own back yard last summer.

Don't take much from the pasting they received last week by the Johannesburg-based Lions in their warm-up game as their 'big dogs', notably stand-off Tusi Pisi, prop Census Johnson and openside flanker Jack Lam have only arrived this week.

Lam, who plays for the Wellington Hurricanes, makes his debut on Saturday. His cousin, Pat Lam, will be better known at the moment but, wow, Jack packs a punch!

South Africa will be next with the final game dependant on results with the top two playing each other and the bottom two doing likewise.

Physicality is the buzzword of the year and the tournament will test the Scots in this department.

All three teams will provide real grunt in the tackle situation and Scotland must continue to improve in this area to be able to compete consistently at this level.

The tour offers the opportunity to gauge where the Scottish team are - whether they are progressing or not - and also will mean some young, and some slightly older, newcomers are thrown in to see what they can do at international level.

Horne and Dunbar are the personnel that I'm looking forward to seeing in action.

Dunbar has a hard edge to him along with a decent lump of power and Horne has the raw materials to revolutionise Scotland's back-play.

Stevie Lawrie's place on the bench for the first time at 29 years of age gives hope to those who think they may have slipped through the international net.

The former Stewarts Melville pupil was originally contracted to Edinburgh, but, through a lack of game time, spent a few years in the English Championship with Doncaster.

His return to the capital a couple of years ago stalled due to injury, but he now finds himself, through hard work, with the prospect of gaining a first international cap on Saturday. Fair play.

What is an acceptable tour results-wise? Well, two from three would be nice and would certainly show improvement, but I feel this tour will play a significant developmental purpose too and the more exposure these young, talented players get, the better in the long run.

There are 25 games left for Scotland before World Cup 2015… the best way to gain experience is to play.