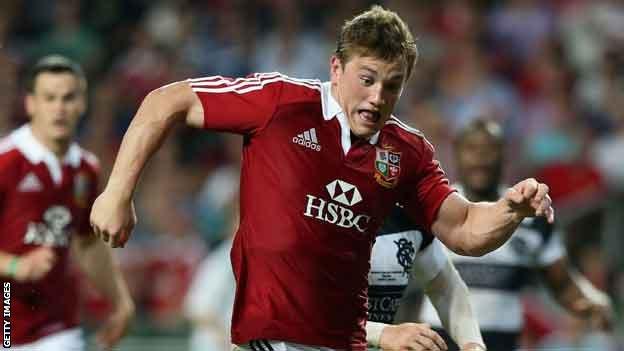 Wales' Jonathan Davies is glad to be playing alongside, rather than against, Manu Tuilagi as the pair prepare to form a new centre partnership.

Davies switches from outside to inside centre for the British and Irish Lions to face Queensland Reds on Saturday.

England's Tuilagi showed his power as the Lions won 69-17 against Western Force in the first game in Australia.

"When you come up against Manu, you're aware of his strengths and hopefully I'll benefit from them," he said.

"He's had a great season and he showed on Wednesday that he's so strong in the tackle and hopefully he can get his arms free and put some of the boys through."

Davies starts his second tour game, having scored on his Lions debut in the alongside regular Wales midfield partner Jamie Roberts.

Tuilagi has a second successive start, moving back to the outside centre role with which he is more familiar, as the Lions prepare for the first Test against Australia in Brisbane on Saturday, 22 June.

Fit-again captain against the Reds, with Gethin Jenkins also shaking a slight niggle to get his first outing.

With "creative" Reds fly-half Quade Cooper among a number of players hoping to earn Wallabies call-ups, Davies believes the hosts will present a significant challenge.

"They've got a fair few Wallabies in their squad and it's important that we get a good preparation," said 25-year-old Davies.

"We've got to make sure that we cut his [Cooper's] space down."

Davies says he and Tuilagi could have benefited from more training time together, but he is unfazed by switching from the 13 to 12 jersey, saying: "I'm happy to be given any Lions jersey.

"I played a lot when I first started playing rugby at 12 and I don't think it makes much difference.

"I'm sure me and Manu will swap and change certain things just to make sure that we're talking and getting our partnerships together.

"That's the most important thing."