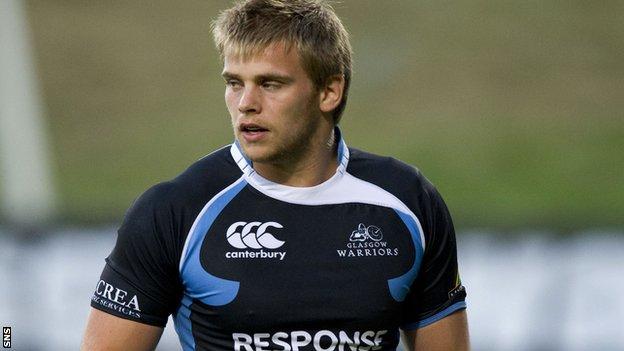 Glasgow hooker Pat MacArthur is relishing the prospect of making his Scotland debut against Samoa.

MacArthur will feature in the opening Test of the South African tour at Durban on Saturday.

"I've never been to South Africa before and then I find out I'm going to start my first Test," he told BBC Scotland.

"It's been a real big week with a lot of smiles. I found out on Tuesday that I was starting and since then it's been a rollercoaster of excitement."

McArthur's Glasgow Warriors's team-mate Alex Dunbar and Edinburgh's Greig Tonks will also make their international debuts in Durban, as interim head coach Scott Johnson looks to a youthful side to shine against Samoa.

"Everyone says growing up 'what do you want to do?' You want to play professional rugby and play for your country," said MacArthur.

"Then it finally comes true and I'm straight on the phone back home to tell the old boy and now it's about putting a gameplan together and making an impression."

MacArthur insists he is not looking too far ahead and is focused on shining on his international debut.

"To be honest, my aim is Saturday: you don't get many chances to put a real statement out there so I'm now thinking about this game and then hopefully build game after game from then on."

MacArthur expects Samoa to provide a "physical test" for the Scots, adding: "Hopefully, it'll be a fast game with plenty of big contacts: that's what we thrive on being the front five.

"It's in my head, we've talked about it and now it's just about going out there and seeing what happens.