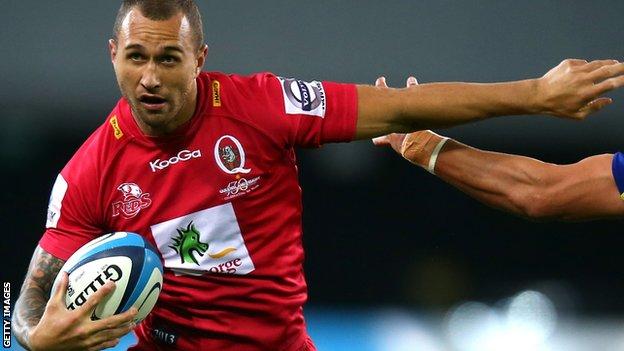 Fly-half Quade Cooper has been named in the Queensland Reds squad to face the British & Irish Lions on Saturday.

The 25-year-old is not in Australia coach Robbie Deans' 25-man preliminary Test squad to face the Lions.

But the tour match at Suncorp Stadium is seen as Cooper's last chance to earn one of the six additional places in the Wallabies squad, to be confirmed on 11 June.

Cooper is one of nine Test players in the Reds' starting XV.

He has 38 caps for the Wallabies, scoring 65 points.

"Our approach was always going to be to field as strong a line-up as possible and I've got every confidence in the group we've chosen to go out and compete against a very talented Lions squad," Reds coach Ewen McKenzie said.

"History suggests that it's a mammoth challenge, but we'll go out there on Saturday with plenty of good intentions and with a commitment to giving a strong account of ourselves across the entire 80 minutes."

The Lions began their Australia tour on Wednesday with a 69-17 victory over the Western Force in Perth.