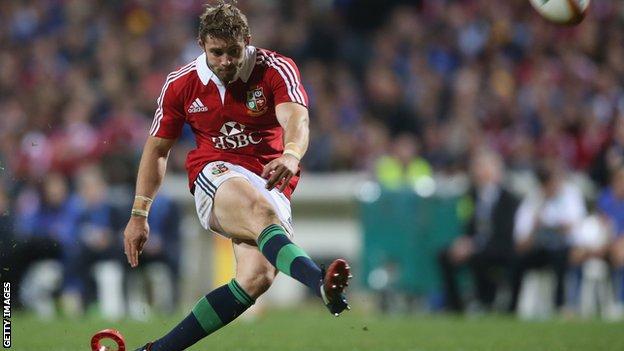 Wales' Leigh Halfpenny took great pleasure from his immaculate kicking display for the British and Irish Lions in their win over Western Force.

"It is up there with the best I've kicked," said Halfpenny.

"I've had some games in which I've had a 100% record, but not as many kicks as that. I am pretty pleased with how it went, but the work doesn't stop here."

Halfpenny slotted over nine conversions and two penalties, with several kicks from the touchline.

His performance made a powerful claim to be the Test goal-kicker ahead of two other proven world-class goal-kickers also in the Lions squad - Jonathan Sexton of Ireland and England's Owen Farrell.

Coach Warren Gatland revealed he let kicking coach Neil Jenkins to decided whether Halfpenny or Sexton would take the kicking duties against the Force.

Jenkins opted for fellow Welshman Halfpenny, with whom he has worked extensively over recent seasons.

"To be honest, the pressure is a real privilege," said full-back Halfpenny, the 2013 Six Nations player of the tournament.

"I love every second of it. I always enjoyed goal-kicking as a kid and I have tried to work hard at it. You watch the likes of Neil Jenkins, Jonny Wilkinson and Dan Carter and you want to be like that.

"That's how I've always felt, and to have kicked for the Lions and to pull on that jersey is just a really special feeling."

Halfpenny, who made one start on the 2009 Lions tour to South Africa and was forced to fly home early due to injury, paid tribute to the influence of coach Jenkins.

"It comes from hard work on the practice pitch with Jenks," he added.

"I can't think of a better guy to have teaching me and having alongside me in games and in training than him. He's a legend of the game.

"He was a world-class kicker and I'm really lucky to have Jenks around, helping with my goal-kicking.

"He's brought me on hugely and I've worked with him since I was a kid growing up in the academy days."