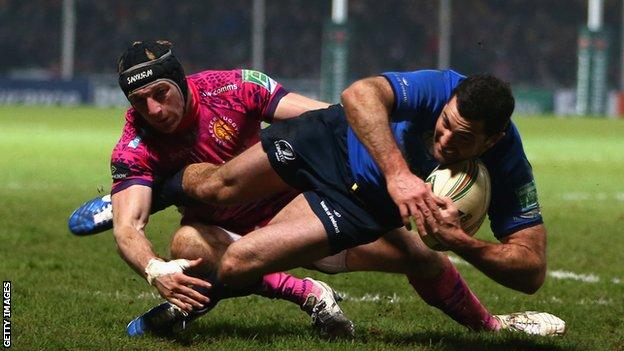 Exeter chief executive Tony Rowe says his club have a great chance of making the knockout stages of the Heineken Cup after Wednesday's draw.

It is the second season in a row that Exeter have drawn the champions, after playing as well as

"We can make something of it this year," Rowe told BBC South West Sport.

"It's a better draw than last year for us. We were really up for it last year but it was unfortunate that we drew the reigning champions and the team that went on to be the finalists.

"I think that we stand a great chance in that group of going beyond the initial rounds."

As well as England fly-half Jonny Wilkinson in their squad, Toulon have Delon and Steffon Armitage, who were brought up in the nearby town of Brixham.

"The Armitage family won't have to go far to watch their lads," Rowe joked.

"I think it'll be a big day, and I hope we get a lot of the French fans over to us.

"I understand that most of the French teams' fans go away to one of their games and it'd be great for them to choose Exeter."

Exeter beat Glasgow, who finished third in the Pro12, 15-6 in a pre-season friendly last August in Scotland and host the Warriors on 31 August this year in their final pre-season game.

The Chiefs have never beaten Cardiff since becoming a Premiership side, losing and drawing with them in the LV= Cup in 2010.

It could also be a chance for new Exeter signings and to face their former club.