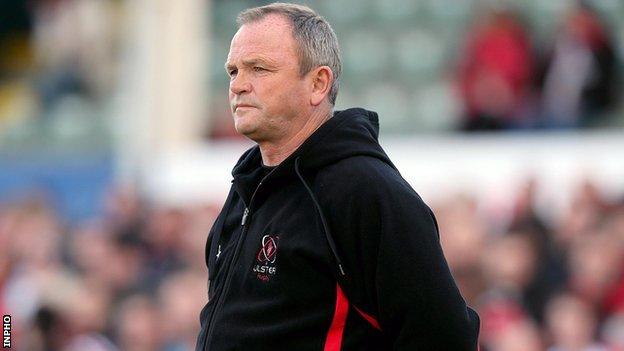 Ulster look to have avoided the toughest pools in next season's Heineken Cup but Mark Anscombe's side will still face a difficult task.

Ulster will be up against this year's English Premiership winners Leicester, French outfit Montpellier and improving Italian side Treviso.

Leinster will take on Northampton, the Ospreys and Castres.

Munster's opposition will be Perpignan, Edinburgh and Gloucester with Connacht taking on Toulouse, Saracens and Zebre.

In their heart of hearts, the Ulster management would probably have wanted to have avoided Leicester while Montpellier will also represent strong opposition after reaching the quarter-finals of the 2011/12 competition.

En route to reaching the last eight last year, Montpellier had been a kick of the ball from beating eventual winners Leinster in the pool stage before a Jonathan Sexton penalty earned the Irish side a draw in France.

Treviso defeated Ulster at Ravenhill in the 2011/12 Pro12 and held Anscombe's side to a 29-29 draw in this season's fixture in Belfast.

Given the improvement in Italian rugby in recent seasons, the game will be far from a walkover for Ulster.

The final act of the draw saw Ulster waiting to see whether the fourth team in Pool was going to be Treviso or Racing Metro so it could have been worse for the Irish province.

Ulster director of rugby David Humphreys said his team had been handed a "tough pool".

"The challenge of facing Leicester is highlighted by their recent performances in becoming Aviva Premiership winners, while Montpellier and Treviso have become increasingly competitive in their respective domestic leagues but also in Europe," added Humphreys.

The inclusion of Gloucester in Munster's pool will bring back memories of the 'Miracle of Thomond' match from January 2003 when the Irish side clinched the unlikely 27-point winning over the English side which earned them a place in the knockout stages.

That win secured Munster one of the two best runners-up spots behind pool winners Perpignan who also will return again to Limerick.

However, on the face of it, Munster looked to have been handed a decent draw having avoided the bigger guns in English and French rugby.

Connacht will be heading into their third season of Heineken Cup trophy.

Toulouse will make the trip to Galway for their second time in three seasons and facing Connacht in the Irish side's debut year in the competition.