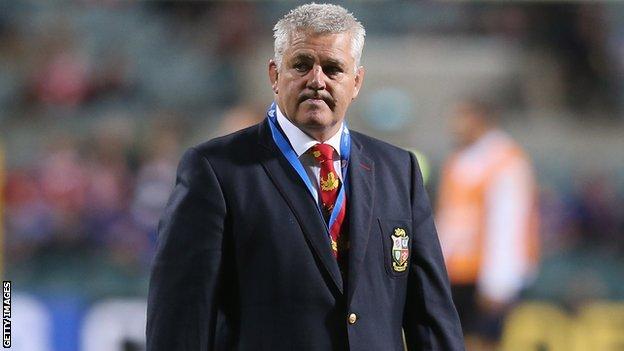 Warren Gatland says the British and Irish Lions may need to ramp up the intensity of their training if they are not sufficiently tested by Australia's provincial sides.

The Lions head coach played down the scale of Wednesday's 69-17 win over a weakened Western Force side.

Force's squad included seven players who have no Super 15 experience.

"Ideally we want to play against the strongest sides we possibly can," said Gatland.

"If we can't, then we are going to have to replicate some of it in training potentially.

"That is something we learned from 2009. We arrived at that first Test against South Africa thinking we were in pretty good nick and there was a big step up. I don't think we will get caught this time.

"We have just got to be aware of the opposition we are playing, and if we do get victories like this, then not get carried away with it."

Former England and Lions coach Sir Clive Woodward suggested the Lions were being treated with "contempt" after the Force rested half of their first-choice team.

Force coach Michael Foley decided to juggle his resources ahead of two matches in five days, with his side facing a Super 15 match against New South Wales Waratahs on Sunday.

Although Gatland steered clear of endorsing Woodward's comments, he did suggest Australia should consider the implications of hosting the Lions.

While the Queensland Reds are likely to provide a much sterner test on Saturday, they, like the Waratahs, ACT Brumbies and Melbourne Rebels, will not be fielding most of their Wallabies, who are in camp preparing for the three-Test series.

"I don't really want to comment on what Clive's got to say," Gatland said.

"I think there is something special and unique about Lions tours and you have got to embrace them. The amount of money it is going to generate for Australian rugby, they need to take it seriously.

"The Force were thinking about their Super 15 game on Sunday and made a few changes. That is their prerogative. Ideally we'd have liked to have played a stronger side but we just made the focus about ourselves. I am sure the Reds will be a lot tougher in Brisbane on Saturday.

"It was a good hit-out. We spoke at half-time about making sure we played for the full 80 minutes, and we did that. There are things for us to work on, our shape. We fixed a couple of things up defensively at half-time, and it was pleasing we came out afterwards, scored pretty quickly and kept that tempo."

Captain Brian O'Driscoll bagged two tries, the first after a neat combination on the left wing with George North, the second after a sizzling move involving Jonny Sexton and centre partner Manu Tuilagi.

"I really enjoyed it, there was good chat from him," said O'Driscoll of Tuilagi, who showed plenty of his trademark power. "I think we did OK. We tried to play off one another, and read one another. It wasn't flawless but I think we did some good things, and hopefully the partnership will be better for having had this game if we manage to play together again."

One area where there were no flaws was the goal-kicking department, where full-back Leigh Halfpenny landed 11 kicks from 11 attempts, converting all nine tries in a 24-point haul.

"We have got one of the best goal-kicking coaches in the world [Neil Jenkins] and three top-quality kickers [Halfpenny, Jonny Sexton and Owen Farrell]," added Gatland, who said he let Jenkins decide whether Halfpenny or Sexton should take on the kicking duties. "Stuart Hogg has been doing quite a bit of work with 'Jenks' as well, so there is four of them. We are pretty fortunate at the moment.

"I think Jonny was a bit disappointed he wasn't kicking tonight. Both of them would have equally done a good job. The good thing was there were a lot of pretty difficult ones from the sideline. Goal-kicking is a hugely important factor in international rugby and you have got to nail your kicks."