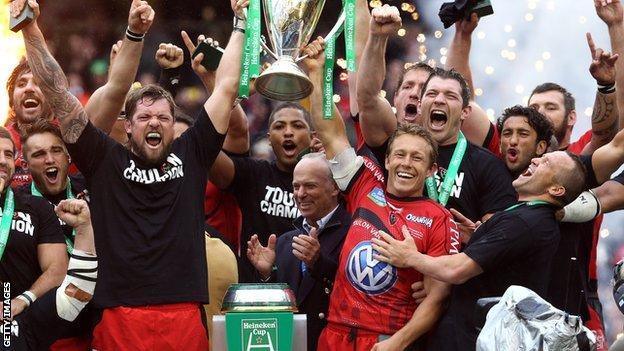 English champions Leicester are in Pool Five with Ulster and Montpellier.

Pro 12 champions Leinster are in Pool One with Northampton and Ospreys, Harlequins are in Pool Four with beaten finalists Clermont Auvergne, and Saracens face Toulouse in Pool Three.

Cardiff Blues were drawn alongside Toulon in the pool stages of last season's tournament and finished a distant third to the cashed-up French side, who clinched their first ever Heineken Cup when Wilkinson guided them to a narrow victory over fellow French side Clermont Auvergne last month.

The former England fly-half, who was voted European player of the year, has extended his stay with the side from the Mediterranean Coast for a further year and will again stand in the Blues' way.

Pools One and Four could see the fight for qualification go right to the wire.

Leinster, Northampton and Ospreys are joined in Pool One by new French champions Castres, who beat Toulon in the Top 14 final at the weekend.

In Pool Four, Clermont and 2011 English champions Harlequins are joined by a Scarlets side who will be desperate to make up for their poor European campaign last season, and wealthy Parisians Racing Metro, who will have the likes of Lions pair Jamie Roberts and Jonny Sexton in their ranks come the new campaign.

With Connacht and Zebre completing the Pool Three line-up, both Toulouse and Saracens will expect to make it into the knock-out stages, with one of the pair qualifying as one of the two best runners-up who join the six group winners in the quarter-finals.