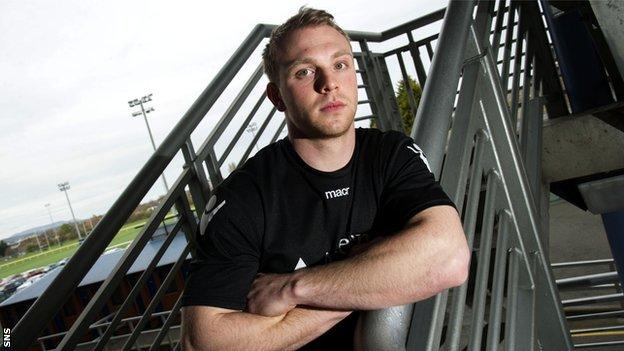 Greig Tonks believes his inclusion in the Scotland side to face Samoa justifies his decision to switch from Northampton Saints to Edinburgh.

The South Africa-born 24-year-old is one of three new caps named by interim coach Scott Johnson.

"It has been a good move for me," Tonks said ahead of Saturday's game.

"This was the aim, the reason I came to Scotland, to play regularly. If anything happened off the back of that then brilliant. Fortunately it has."

Indeed, Tonks might have been slightly surprised to have overtaken Glasgow Warriors' Peter Murchie in the race to understudy Stuart Hogg, the first-choice full-back who is with the British and Irish Lions.

Now, a year after joining Edinburgh, the match against Samoa in Durban takes Tonks back to his homeland for a four-nation tournament.

"It's great to play in South Africa," he said. "It's such a rugby-mad country.

"The environment is fantastic. This is a good opportunity, but it will be tough."

Like Tonks, the other new caps, Glasgow duo Alex Dunbar and Pat MacArthur, view it as a chance to stake a claim for a place in the squad for the World Cup finals to be held in England in two years' time.

Centre Dunbar, 23, said: "I'm thrilled. I've been fortunate enough to play regularly for Glasgow this season and we've been on a great run.

"It's fantastic to have the chance to come out here and play.

"It's a huge opportunity for me. There are a lot of young guys who have come into the squad who are looking to impress."

Hooker MacArthur has benefitted from an injury to Ross Ford.

"Now it is about a big week training and making the most of it on Saturday," said the 26-year-old.

"It was a proud moment when I heard I was starting for my country.

"I have been pushing for a while and now that I have got my chance I have to prove a point."