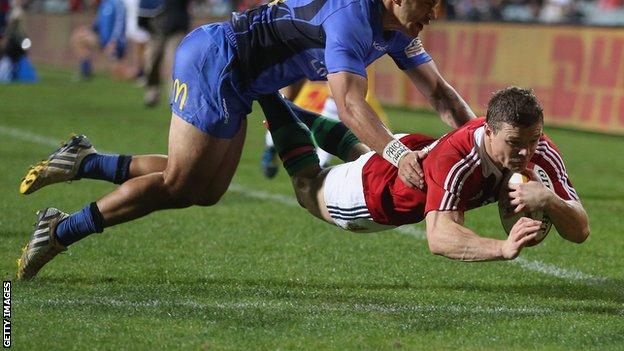 The British and Irish Lions ran riot in their first match on Australian soil with a nine-try victory over Western Force in Perth.

First-half scores from Jonny Sexton, Brian O'Driscoll and Tom Croft put the tourists 27-3 up, but they lost prop Cian Healy to a potential tour-ending injury.

"An under-strength Western Force tried their best and played with spirit, but they were hopelessly outclassed by the Lions. The tourists only led 10-0 approaching half-time but they scored 59 points in the last 48 minutes.

"Next up they play Queensland Reds in Brisbane on Saturday - that will be a much tougher test. But the Lions will be full of confidence."

The Irishman was taken off on a stretcher off after twisting his ankle minutes before the interval, although initial reports suggested it may only be sprained.

The Lions ran in six more tries on the resumption, with Leigh Halfpenny landing every conversion - many from the touchline - and two penalties in a magnificent goalkicking display that earned him 24 points.

If the Lions coaches will be disappointed to concede two tries, it was otherwise a highly impressive display of power and precision in the same city where they racked up 116 points on their last visit in 2001.

Healy's early departure completed an eventful outing for the Leinster prop, who was earlier the subject of a biting claim from Force scrum-half Brett Sheehan.

Sheehan pointed to his arm in the 18th minute, claiming he had been bitten after tangling with Healy following a tackle. "I don't know if it was an accident or on purpose," Sheehan said at half-time. But the television match official ruled there was no evidence for his claim.

An early break from Tommy Bowe, bursting onto a short pass from Sexton, preceded a penalty that Halfpenny landed to open his account.

Sexton's scheming - a delicate cross-kick to George North almost led to an earlier try - was rewarded with the first score in the 11th minute.

The Lions stretched the Force defence from side to side, North initially making ground on the left, before Sexton delightfully dummied his way over. Halfpenny converted.

Two more chances quickly came and went, both after strong Lions scrums. Manu Tuilagi was held up short, before scrum-half Conor Murray made a solo dart for the line and lost the ball in contact.

After dominating the opening 20 minutes, the Lions were forced to twice defend line-outs close to their own line after Western Force broke out, and - to the hosts' credit - opted to kick penalties to touch rather than at goal.

But hooker James Hilterbrand, playing just his second game for the Force, was twice unable to find a straight throw when the hosts had an opportunity to challenge.

Sheehan did kick the Force's only points before the interval after Rory Best over-threw a line-out.

But after quick hands from Sean O'Brien, O'Driscoll released North and then took a return pass from the Wales wing to score his sixth try for the Lions, 12 years after his first in the same city.

O'Brien and Alun Wyn Jones then put Tom Croft over in the left corner before Halfpenny nailed another superb touchline conversion to maintain his 100% record from the tee.

The second half was only a minute old when the outstanding Jamie Heaslip, who set the move in motion with one of several barnstorming runs, strolled over on the right after a beautiful long pass from Sexton.

The Force did hit back, number eight Richard Brown creeping over after a quick pick-and-go from captain Matt Hodgson.

But it did little to upset the Lions' rhythm. Mako Vunipola - on for Healy - finished powerfully in the right corner after another deft Sexton pass.

Bowe squeezed over in the same spot soon afterwards, after the Force lost centre Ed Stubbs to the sin-bin for killing the ball.

The Lions conceded a second try when replacement Lachlan McCaffrey stretched through Sexton's tackle, after O'Brien appeared to dive out of the line.

But they responded with the best try of the game, Sexton and Tuilagi combining superbly to put O'Driscoll away for his second.

Owen Farrell was on for barely a minute when he scored with his first touch, and there was still time for Croft to depart after smashing heads with Brown, Jones to be sin-binned and Geoff Parling to stretch over in a breathless finale.