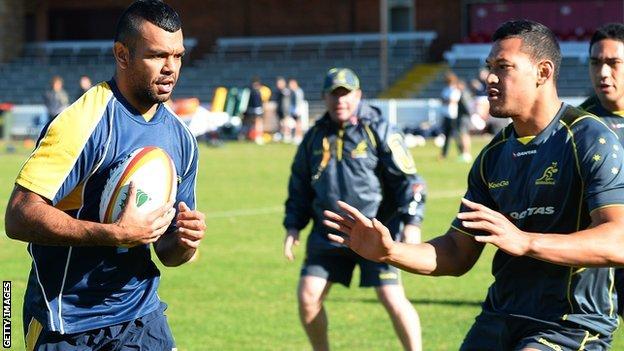 Australia scrum-half Will Genia says the enigmatic Kurtley Beale is in a strong position to start the first Test against the British and Irish Lions on 22 June.

It would mark an unlikely turnaround for the 24-year-old utility back who three weeks ago booked himself into rehabilitation with alcohol-related problems.

Whether Beale can force his way into the Australia side in his preferred position of fly-half remains to be seen - his Melbourne Rebels team-mate James O'Connor has been impressing there in training - but everybody in the Wallabies camp is delighted by the way he has come back.

Speaking to BBC Radio 5 live, Genia said: "Kurtley has been exceptional. He's had some problems with alcohol and behavioural issues - but he seems to have put those behind him and got himself in a healthy physical and mental state.

"He's now in a very good position to be in the frame [for the first Test] in the next couple of weeks."

Beale's potential inclusion is a popular one with followers of Australian rugby, who are also keen to see Genia's Queensland Reds team-mate, Quade Cooper, called up after the weekend.

The Wallabies head coach Robbie Deans has been criticised by sections of the media for leaving the fly-half out of his provisional 25-man squad, citing weaknesses in the defensive side of his game.

But with Deans set to add six names to that squad after the Lions play the Reds on Saturday the door is still open.

"You'd imagine that after what Robbie said about him he would put that into practice this weekend and there's no better time or opposition to prove his point," said Genia.

"It'll be a big game. The Reds are playing close to a full-strength team and like all the state sides they are going out to win.

"It's undoubtedly an opportunity for Quade to showcase his abilities and hopefully he will get a call-up."