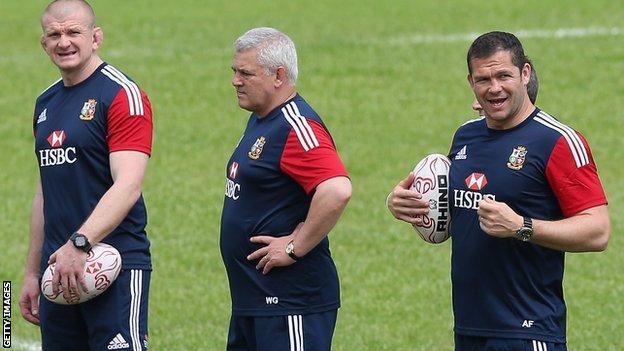 Assistant coach Graham Rowntree has dismissed concerns that the British and Irish Lions will face a weak Western Force side in Perth on Wednesday.

The Force, who have a Super 15 game against New South Wales Waratahs on Sunday, field five players with Test experience but a backline with two players untried in Super Rugby.

"It's not a bad team," said Rowntree.

"There are not a lot of guys there who have played a lot of Super 15 rugby, but it still looks strong enough."

He added: "There has been a lot of local chat about how they want to play this game, how physical they want to make it, and we've got to meet that challenge, whoever is on the field."

We are very respectful of the opposition, but we will worry about getting our detail right

The Force, who are 13th in the Super 15 table after three wins and a draw from 14 matches, are without wing Nick Cummins and flanker Ben McCalman, who are both in the Australia training squad preparing to face the Lions in the three-Test series starting on 22 June.

Their backline includes wing Dane Haylett-Petty, who is back in Perth after two years playing Top 14 rugby in France with Biarritz, but two players - left wing Corey Brown and centre Chris Tuatara-Morrison - who have yet to experience Super 15 rugby, plus five more novices on the bench.

"We have had to juggle our squad between the two games but picking a number of our senior players in key positions reflects how seriously we are taking the Lions," said Force coach Michael Foley, the former Wallabies hooker who was part of the side that won the 2001 Lions series.

"Every person in our team will treat it as a privilege and we will go hard. We trained twice a day last week and have worked very hard on our combinations.

"It is an enormous challenge the Lions are going to pose, but when you look at our defence, you see how hard we fight in that area, even if we know we are going to be tested.

"Against the Barbarians the Lions looked like a team very determined to come here and achieve what they set out to do, which is to win a series. Their first performance showed a lot of highlights and I am sure they will become more cohesive as a team the longer they play together."

Rowntree, who reported that captain Sam Warburton will train fully on Wednesday for the first time on tour, and prop Gethin Jenkins returned to full training on Tuesday, admits the Lions are focused on themselves rather than the opposition at this stage.

"We are very respectful of the opposition, but we will worry about getting our detail right and getting our calls and structures up and running," he added. "We've got to get combinations going."

"In difficult conditions and our first hit-out together [in Hong Kong] the guys set a high standard and tomorrow night's crew have got to move that bar up again."