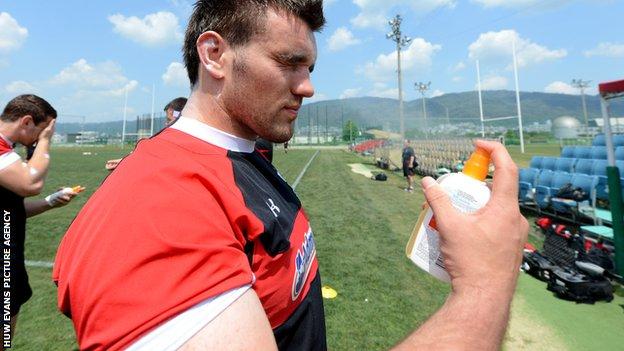 Shaun Edwards has revealed Wales will ask for water breaks in Saturday's first Test against Japan to guard against dehydration.

Wales trained in 30C temperatures and oppressive humidity in Osaka on Tuesday.

"We will be asking the referee for a water break after 20 minutes if possible," said defence coach Edwards.

The British and Irish Lions enjoyed water breaks in their opening tour win against the Barbarians in Hong Kong.

"I don't know if we will get a water break because it is unprecedented for me," Edwards added.

"The only time I played in conditions like this was in Papua New Guinea and we didn't have one then. But it would have been nice to have had one.

"It was very difficult and I remember after the game Garry Schofield, our captain, was in a really bad state with dehydration and he was shivering.

"It is uncomfortable and unusual for people like us from the UK to play in these conditions."

Asian champions Japan regularly play in such sweltering conditions and the Japanese are expected to be consulted if Van der Merve does consider Wales' request.

But if Wales, who have a 100% record against Japan, are not allowed water breaks, Edwards has told his players they must "grit their teeth and tough it out".

"We are in decent shape as we put in about three weeks of conditioning before we came out to Japan," added Edwards.

"But there is no doubt it is uncomfortable and something we are not used to."

Wales will be without Craig Mitchell for Saturday's first Test in Osaka, with the Exeter Chiefs prop ruled out with an ankle injury.