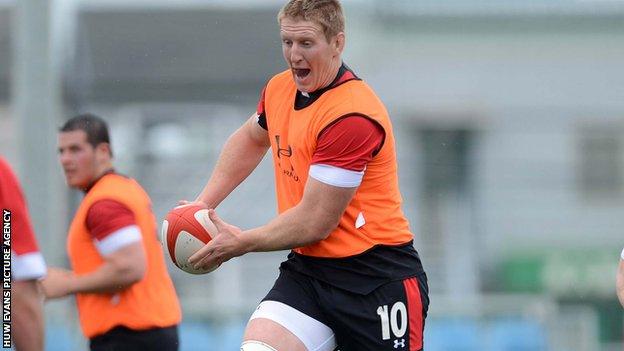 Lock Bradley Davies says he has no plans to change his style despite being made Wales captain in Japan.

Sam Warburton, Ryan Jones and Gethin Jenkins, who all captained Wales during the Six Nations, are missing for the tour to the Far East.

"I'm no good at inspirational speeches and that. My type of game is to lead from the front, get stuck in and hopefully that will help the lads."

With 15 Welsh players on duty with the British and Irish Lions and other experienced internationals overlooked, Davies was considered the "natural" choice to lead a young squad for the two Test tour of Japan.

He added: "I've captained Wales at age-grade levels and Cardiff Blues, but being Wales captain is different because of the profile of the position and the fact there's no-one above me in number of caps."

Davies will complete his return to Test rugby by captaining Wales, having not played for his country since he was punched from behind by New Zealand hooker Andrew Hore at the Millennium Stadium in November.

Hore was banned for five weeks for his action, which forced Davies to miss the following Test against Australia.

An ankle ligament injury in January then ruled Davies out of the Six Nations, forcing him to watch Wales' title success on the sidelines for the second successive season after his own seven-week suspension in 2012 for a dangerous tackle on Ireland's Donnacha Ryan in the opening game of the Grand Slam campaign.

He now finds himself in the unfamiliar role as tour veteran with an inexperienced Wales squad in Japan.

"The weather is going to be a factor but we prepared for it and we'll have an intense week of training here in Osaka to get used to it," said Davies, set to win his 40th cap in Saturday's first Test in Osaka.

"The Lions showed that in Hong Kong. If you train hard to acclimatise then you can still play a high standard of rugby."

Scrum-half Fumiaki Tanaka started for Highlanders as they defeated the Blues 38-28, while hooker Shota Horie played the last quarter as a replacement in Melbourne Rebels' 20-33 defeat to Queensland Reds.

The pair are breaking new ground for rugby in Japan by playing in the southern hemisphere tournament, but Japan lost 22-8 against Fiji on Saturday.