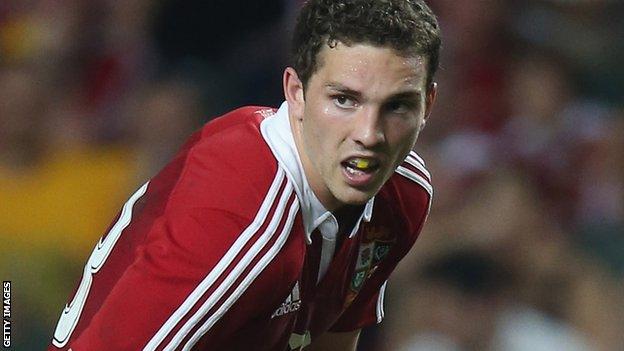 Wing George North says the players who featured in the British and Irish Lions' win over the Barbarians have set high standards.

The Lions opened their tour with a convincing 59-8 win over the Baa-Baas in Hong Kong.

North will line-up against Western Force in a side that will not feature any players who started on Saturday.

"It was a great start for the boys and they've put the standard really high," said 21-year-old Welshman North.

"It's our job on Wednesday for the boys to push on from that.

"It will be difficult but that's what competition for places is all about and I'm thoroughly looking forward to my chance."

North, who will join Northampton from the Scarlets later this summer, made his Lions debut as a second-half replacement for Jamie Roberts in Hong Kong.

Although the heat and humidity of Hong Kong had proved difficult, North was pleased to have been involved against the Barbarians.

"It's one of those things you dream of as a boy and then to finally put it [jersey] on and be involved in the game is something spectacular for me," North added.

"Hopefully there will be a lot more to come but at the moment I'm obviously chuffed to be involved and get my chance on Wednesday."

With Sam Warburton still absent due to a knee injury, the Lions will be captained by Ireland centre Brian O'Driscoll against Western Force.

North is one of four Welshmen in a side which includes five players who will be making their Lions debut.

Among the debutants is Manu Tuilagi and North is looking forward to playing alongside the Leicester Tigers centre and Leinster's O'Driscoll.

"It's not a bad partnership to have that such quality inside you," North said.

"I'm looking forward to playing with Brian, Tuilagi and all the boys."

Meanwhile, the Western Force said they are preparing to leave their mark on the Lions in their first game in Australia.

Force skipper Matt Hodgson said even if his team failed to beat the Lions, they at least want to leave them with a few bumps and bruises. They will name their side on Tuesday.

"I think any loss is going to be a blow to them," said Hodgson. "They've probably come out and pencilled in victories in most of their games leading up to the Test matches.

"So if we can't get the win, we're going to give them a solid performance and hopefully hurt a few of their bodies."