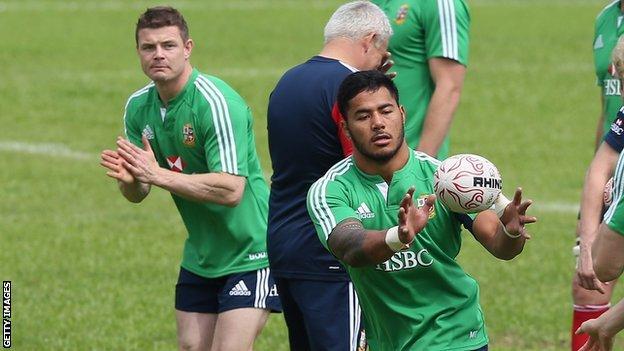 O'Driscoll, 34, begins his fourth tour outside the 22-year-old when the Lions face Western Force on Wednesday.

"I'm going to follow him around because the guy tends to make holes wherever he goes," said the Irishman.

"He will create opportunities for others with the lines he runs and the way he carries the ball."

He is a very destructive ball-carrier who has an array of skills. It will be good fun playing with someone of his calibre

With O'Driscoll and Leicester tyro Tuilagi both involved in domestic finals immediately before the Lions left the UK, they were always likely to be paired together for this second match of the tour in Perth, with regular Wales partnership Jamie Roberts and Jonathan Davies both starting well against the Barbarians.

Roberts and O'Driscoll are favoured to revive their successful 2009 combination when it comes to the Test series. But Tuilagi has the chance to show his own brand of hard, direct running can be just as effective as Roberts in getting the Lions through the first line of defence.

With O'Driscoll's Leinster and Ireland team-mate Jonny Sexton inside them at fly-half, and Leigh Halfpenny, Tommy Bowe and George North forming a potential Test back three outside them, the Lions attack is brimming with possibilities.

"Manu is only one threat," O'Driscoll noted. "When you look at that back-line there are a lot of talented players that have a big mixture of skills. But it will be good fun playing with someone of his calibre.

"He is a very destructive ball-carrier who has an array of skills that he probably doesn't get the credit for that he deserves. It is definitely an exciting feeling partnering him and I am looking forward to playing with him for the first time."

That feeling is certainly mutual.

"Everyone knows Brian is a legend and it is an honour to play this game with him," said Tuilagi. "I just can't wait.

"I am just trying to enjoy my first Lions tour and make the most of it. It is a once in a lifetime opportunity.

"Every player that gets picked is at the top of their game and the boys who played on Saturday set the bar really high. Now it is up to all of us playing on Wednesday to keep it high."

This will be the first time Samoa-born Tuilagi, usually an outside centre with Leicester and England, has started at 12 in an international context.

Some observers such as former Wales fly-half Stephen Jones, who played alongside O'Driscoll on the 2005 and 2009 Lions tours, thought the Irishman would be given the greater decision-making responsibility usually demanded of the inside centre role.

"As a fly-half you are looking at the breakdown and the ball, and you need an intelligent player outside you who is scanning and looking at the bigger picture, and how the opposition are set up defensively," Jones told BBC 5 live recently.

"Brian is the best person I have played with for feeding information into you, early and correctly. He makes you look good as a 10."

Tuilagi has shown signs lately of an improved passing and offloading game, working closely with Leicester's Australian coach Matt O'Connor, who he hails as a "massive influence".

"I will just play my normal game," Tuilagi said. "It is not a massive difference, I am just one closer to the 10. It means I get my hands on the ball more and can get more involved in the game.

"There is a bit more talking and passing on information, telling the forwards what to do. You have to see who is in front of you and make the right decisions.

"We just have to stick to the game plan and we will be all right. We have to make the right decisions for the team and not for ourselves. It is not about the individual."

Gatland has also opted for familiarity in combinations elsewhere. Conor Murray - who impressed off the bench against the Barbarians - gets the chance to start ahead of Ben Youngs at scrum-half alongside his regular Ireland team-mate Sexton.

"We have to build on the mentality we showed against the Barbarians of being ruthless and making ourselves very difficult to beat," O'Driscoll added.

"That started at the weekend and hopefully will continue for the duration of the tour."