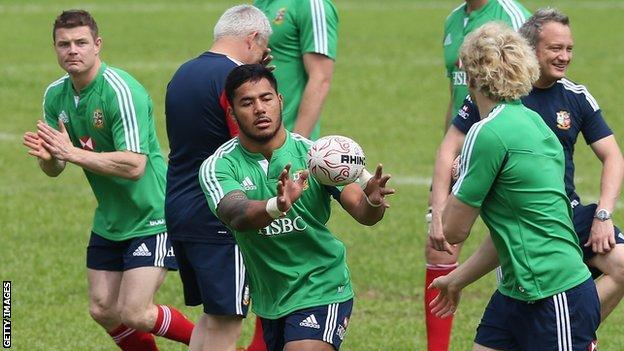 Ireland centre Brian O'Driscoll will captain the British and Irish Lions against Western Force on Wednesday.

The 34-year-old, on his fourth tour, leads the Lions for a sixth time in Perth, after four matches in New Zealand and one in South Africa.

He will partner Manu Tuilagi, one of five players making his Lions debut.

Leigh Halfpenny, Tommy Bowe and Tom Croft get their first outings of the tour, while George North, Jonny Sexton, Conor Murray, Cian Healy, Alun Wyn Jones and Jamie Heaslip, who all came off the bench make their first starts.

But Ireland full-back Rob Kearney will miss both Wednesday's match and Saturday's third game against the Queensland Reds in Brisbane.

Kearney pulled out of Leinster's Pro 12 final against Ulster on 25 May after feeling tightness in his hamstring in the warm-up.

That has now been diagnosed as a grade one tear, with Lions coach Warren Gatland admitting the player is causing "a little bit of concern".

"We will have to see how he responds and potentially if it doesn't heal as quickly as we might like, then we will have to put some plans in place [for a replacement]," said the head coach.

"But we want to give him a bit of time. He had a scan in Hong Kong and the medics have put a plan in place for the next week or so.

"We feel like we have enough cover at the moment with Leigh Halfpenny and Stuart Hogg, and Sean Maitland has also played at full-back in the past.

"We just have to see how he progresses, and whether he hits some markers within a certain time-frame."

for Wednesday's match, but Gatland is hopeful he could be fit to face the Reds.

"Sam has been doing some of his own training but he had to stay off his knee for five days before he is ready for full contact," Gatland explained.

"Hopefully he will train with the other players not in this 23 over the next couple of days and put himself in contention for Saturday."

Wales prop Gethin Jenkins has returned to full training, and will start in Brisbane next weekend if he suffers no reaction to a calf problem over the next 48 hours.

O'Driscoll returns to the city where he started his first game for the Lions as a full-back, the only time in his career he has played there, at the start of the 2001 tour.

"I am a bit more comfortable playing at 13 this time," he said. "It is very exciting. I haven't lost any of the buzz about being involved with the Lions. It is still a very special place to be.

"Now we have finally arrived in Australia it feels like the tour has truly begun.

"We are in a good place. It is a very strong squad with huge competition for places, and you don't want any bad individual or collective performance at this stage as we build towards the first Test."