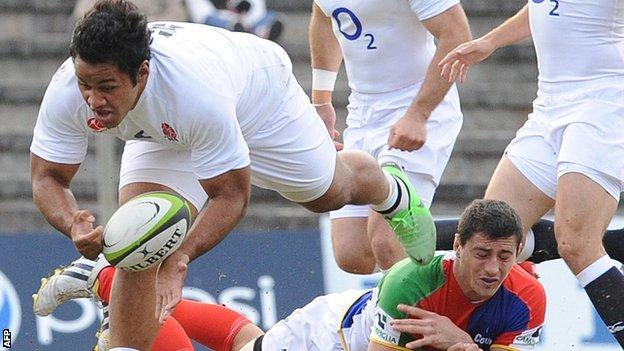 Billy Vunipola scored a six-minute first-half hat-trick as England powered to a convincing 41-21 win over a South American select side in Montevideo.

In their first ever match on Uruguayan soil, an inexperienced England side were in clinical form against the Consur representative XV.

Ben Foden went over twice, while there were also tries for Tom Wood and Paul Doran Jones.

England will now head to Argentina, where they will play two Tests against the Pumas.

The first is on 8 June in the northern city of Salta, while the second will be played a week later in the capital Buenos Aires.

An error-strewn start in Montevideo saw the hosts take a shock lead but, from the moment Foden levelled on the 20-minute mark, England took complete control as the South Americans had no answer to their forward power.

Vunipola's treble marked a memorable weekend for his family after his older brother, the Saracens and England prop Mako, made his debut for the British and Irish Lions on Saturday against the Barbarians in Hong Kong.

England were coming into the match full of confidence after tries from three debutants secured a 40-12 win over the Barbarians at Twickenham on Sunday, when they took their first chance to shine since their 30-3 mauling at the hands of Wales in the final round of the Six Nations.

With a number of his established internationals on Lions duty in Australia, coach Stuart Lancaster took the opportunity to hand seven more players their first starts for England in this non-cap game.

Luther Burrell, Kyle Eastmond, Jonny May, Kearnan Myall, Henry Thomas, Myler and Vunipola were all handed their full international debuts, while Wood was made captain.

The South Americans made the brighter start and were awarded a penalty try on 17 minutes after Francisco Sansot broke clear. Standing virtually on his own try-line, May was adjudged to have deliberately knocked-on.

He was yellow carded for the offence and fly half Benjamin Madero converted to give the Consur XV a 7-0 lead.

England hit back immediately, however, when Foden touched down in the corner after a pass from Stephen Myler, who hit the upright with the subsequent conversion.

After their slow start, England were now suddenly in control and a six-minute treble from Vunipola saw them cruise into a commanding lead.

The London Wasps number eight drove over from a line-out for his first try on the half-hour mark, before touching down in similar style just three minutes later.

The 20-year-old completed his treble in the next attack out wide after a defence-splitting pass from Eastmond.

Myler, who impressed on his first start at fly-half, converted two of the three tries.

Skipper Wood finished the first-half scoring when he powered over following a neat pick-up-and-run from Richard Wigglesworth, with Myler again converting.

To the Consur XV's credit, they came out well after the break and were next on the score sheet when Argentina's Sansot touched down under the posts after a clever chip. Madero comfortably converted.

England's superiority was quickly restored, though, when Foden touched down for his second try on 48 minutes following Tom Johnson's fine break.

Replacement Paul Doran Jones then capitalised on more forward dominance to make it 41-14 just before the hour mark.

Diego Magno drove over for the hosts on 68 minutes, with Madero converting, to complete the scoring.